The Art From The Lakes program(previously on Be Wa) just wrapped up a busy week of Shiga exhibitions, workshops and events with three visiting Michigan artists: Linda Beeman, Martha Liddle-Lameti, and Thomas Tomasek.

In preparation for the exhibitions, the Be Wa team had been helping in promotional efforts since there was some concern that Shiga’s art community may not be as broad or publicly integrated when compared to it’s Michigan counterpart. So we enjoyed seeing the successful turnout for the exhibitions, but I think the smaller core community here offered one advantage in that everyone involved soon became fast friends.

So last week was loads of fun spending time with both the visiting artists and the local Shiga AFTL artists, not only at the program events, but also out exploring Shiga together. For this article, I’ll focus on one particular day last week when we all piled into a couple cars and headed up to the northern coastal area of Lake Biwa, around the towns of Kinomoto and Nishiazai (now all technically merged into Nagahama City). Kinomoto is a nice little town with several traditional old shops and temples, while Nishiazai inhabits the more rural area along the northern mountainous coast of Lake Biwa.

Nishiazai was first on the itinerary, so our morning was a beautiful drive around the lake. The Okubiwako Parkway offers picturesque views from the coastal mountainside. 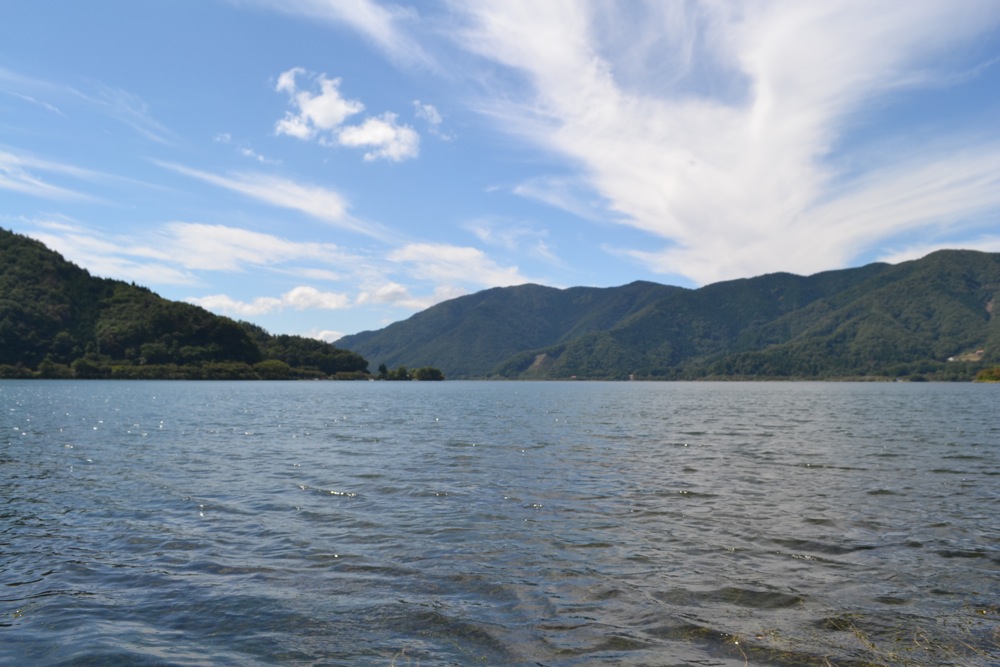 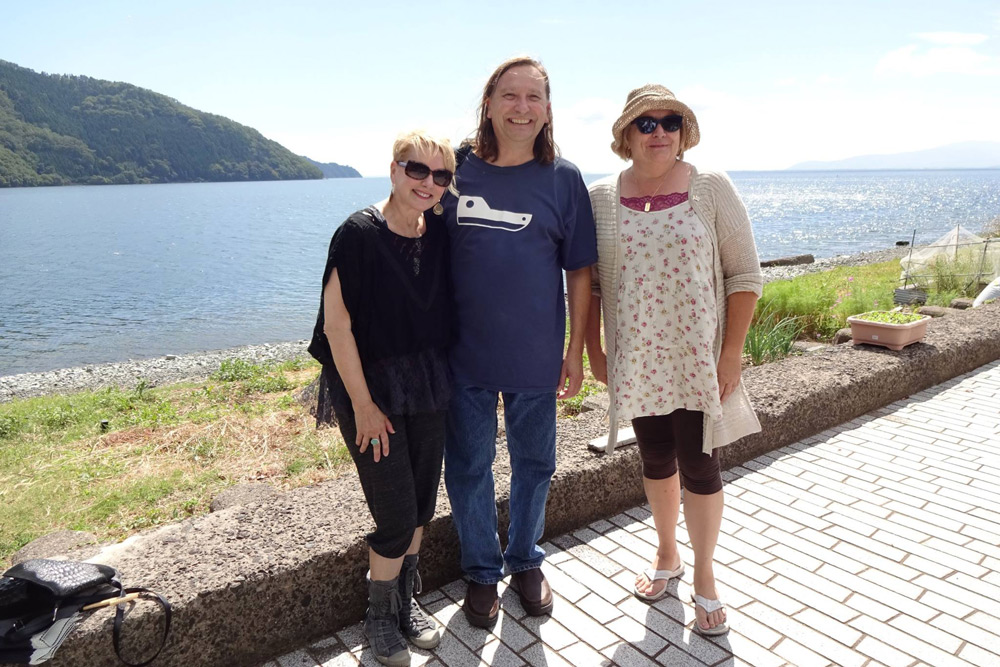 After a few quick photo stops, we made it to one of our destinations, a tiny village called Sugaura. This coastal village was only accessible by boat until roads were built from nearby towns about 50 years ago. It is also a rare example of a community that was historically granted autonomous sovereignty, separate from Japanese rule. The entrance gate below marks the border between Japanese rule and the sovereign rule of Sugaura. 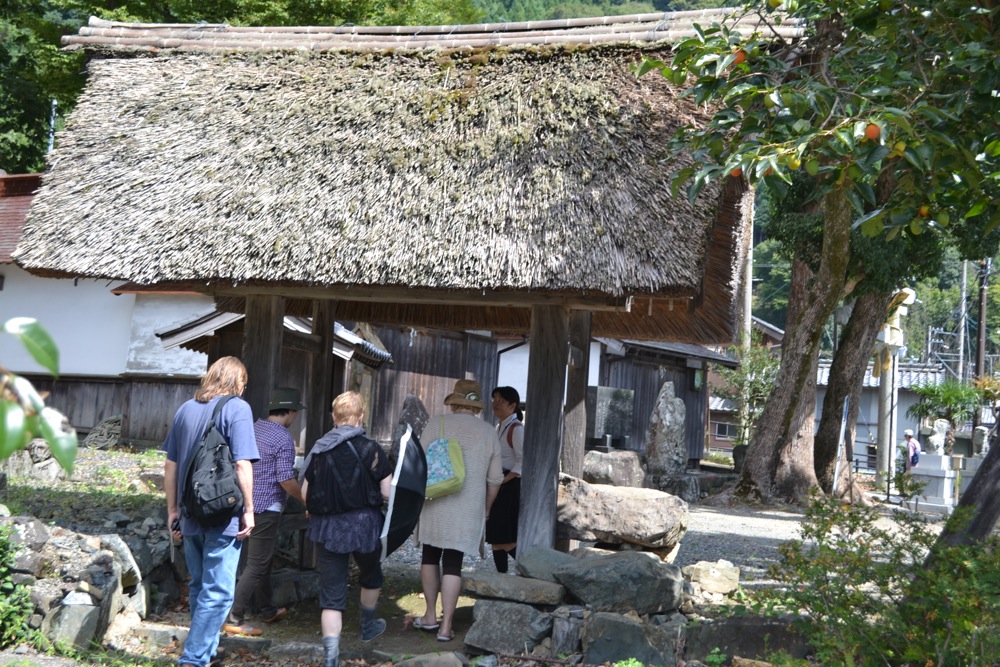 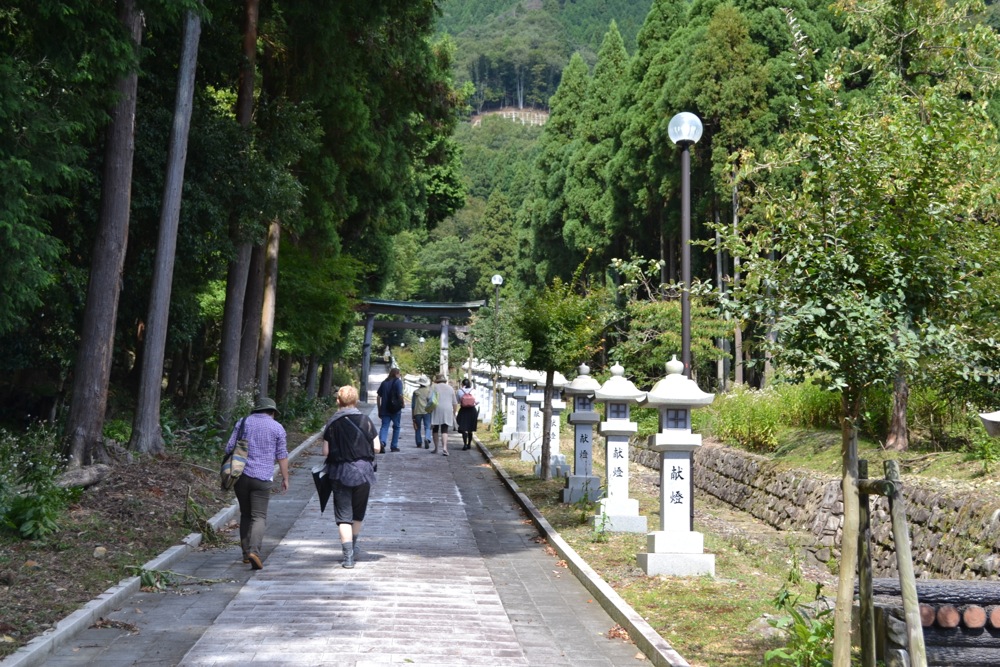 The main attraction of the village, aside from the scenery and history, is Suga Shrine, which is tucked up on the mountainside above the village. 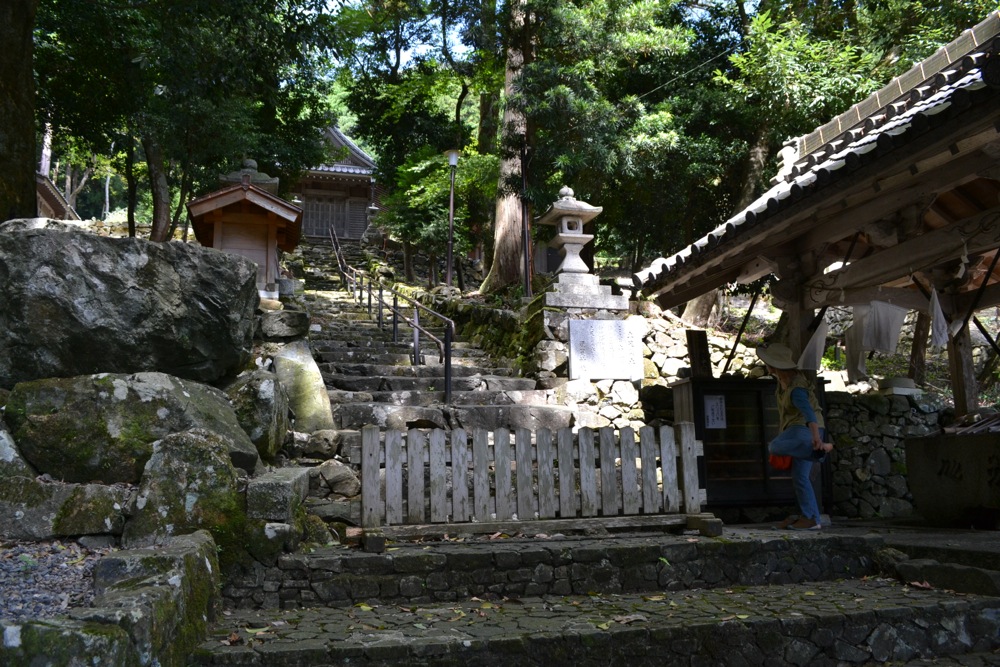 This particular shrine has a unique custom of requesting visitors to remove their shoes when they reach the hand washing basin. So from here on up, we went barefoot. 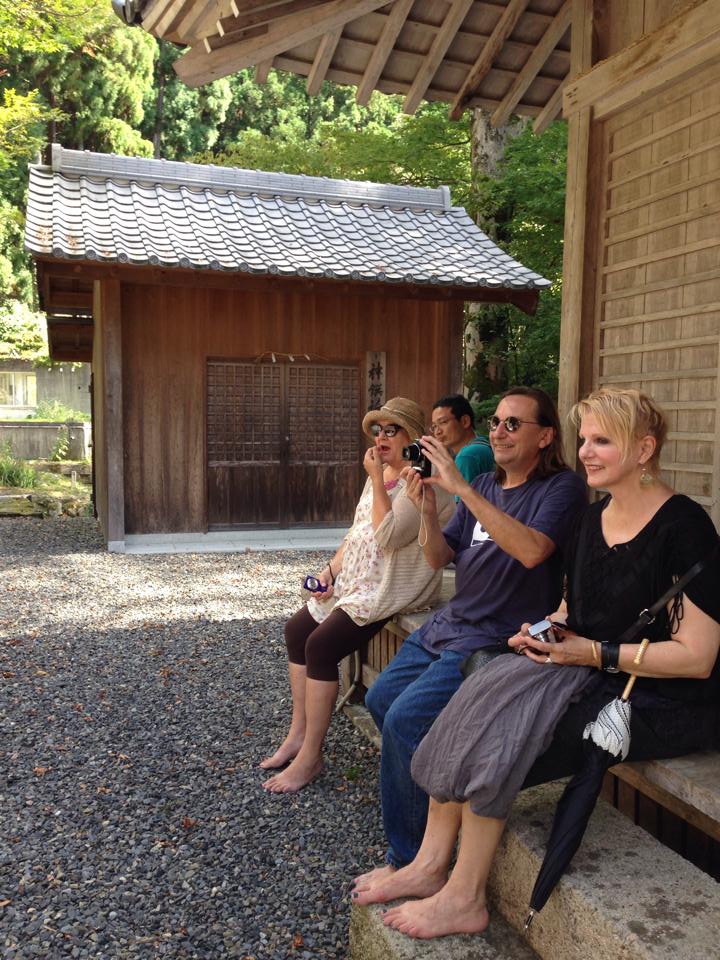 The main hall is quite modest, which allows the surrounding nature to share the focus. Really a peaceful area, probably also because not many visitors make the trek out here, so we had it all to ourselves. 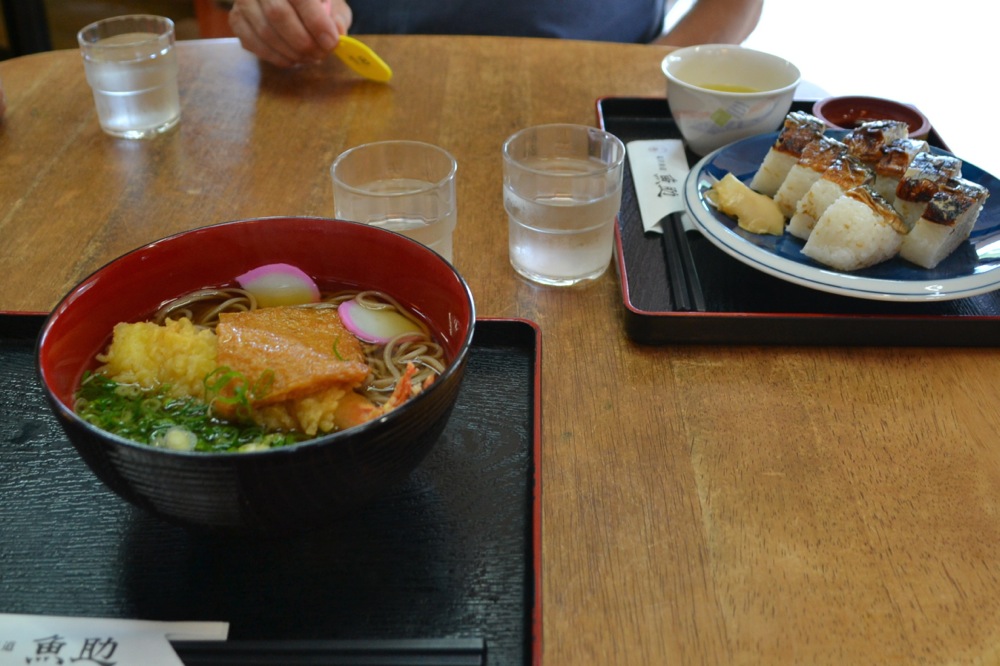 Next, a quick stop for lunch on our way to Kinomoto. Some tempura soba, and on the right is the local specialty, saba sushi (mackerel). Saba actually comes from the Japan Sea an hour from here, but has become a local specialty both in the form of sushi, and perhaps more famously as Saba Somen.

Next stop: one of the many local temples of this region. Just 10 minutes outside of Kinomoto town, but already seeing “Beware of Bears” signage, we arrived at Shakudo-ji Temple. 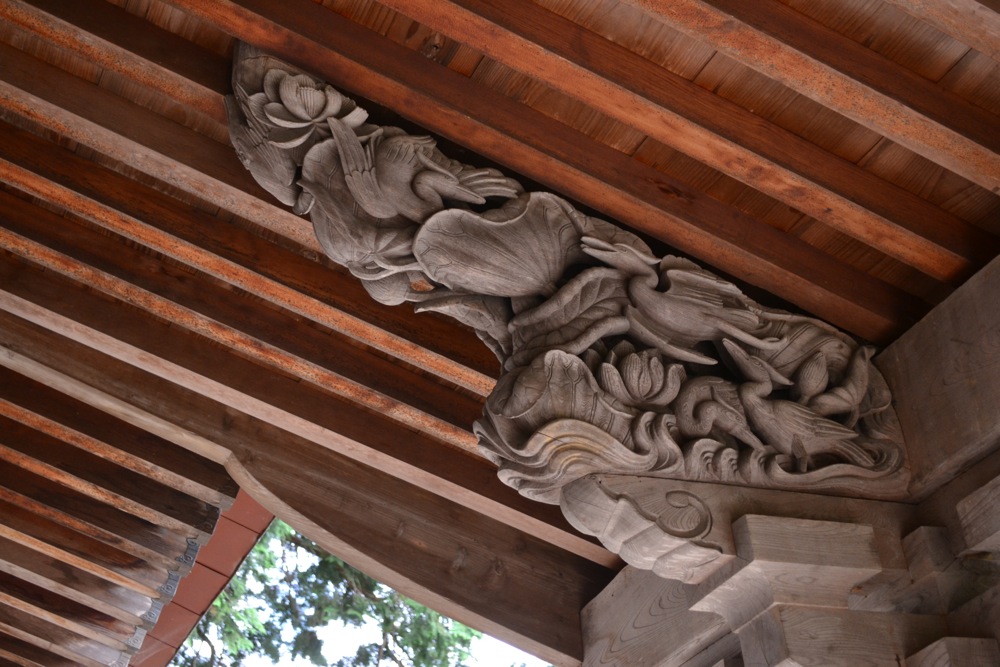 This temple is famous for the deity in the main hall, an 11-faced Kannon bodhisattva which is also a designated national treasure. No photos allowed inside, but you can see the statue here. The Nagahama area is famous for the many Kannon statues that inhabit the local temples, so we’re planning a future trip to see more of these temples and we’ll be sure to report our findings. The hall of Shakudo-ji is staffed by local townsfolk, who have traditionally cared for the temple rather than the more common system of a monk caretaker. The interior is very intimate and we were allowed to see the statues and artwork up close as the staff pointed out important and unique features. I’ve always had better experiences at these smaller remote temples where the staff can spend more time with you as opposed to bigger more famous temples that cater to numerous visitors.

I should note for anyone who makes the trip here, you should also follow the short walking trail back to Keisoku-ji. 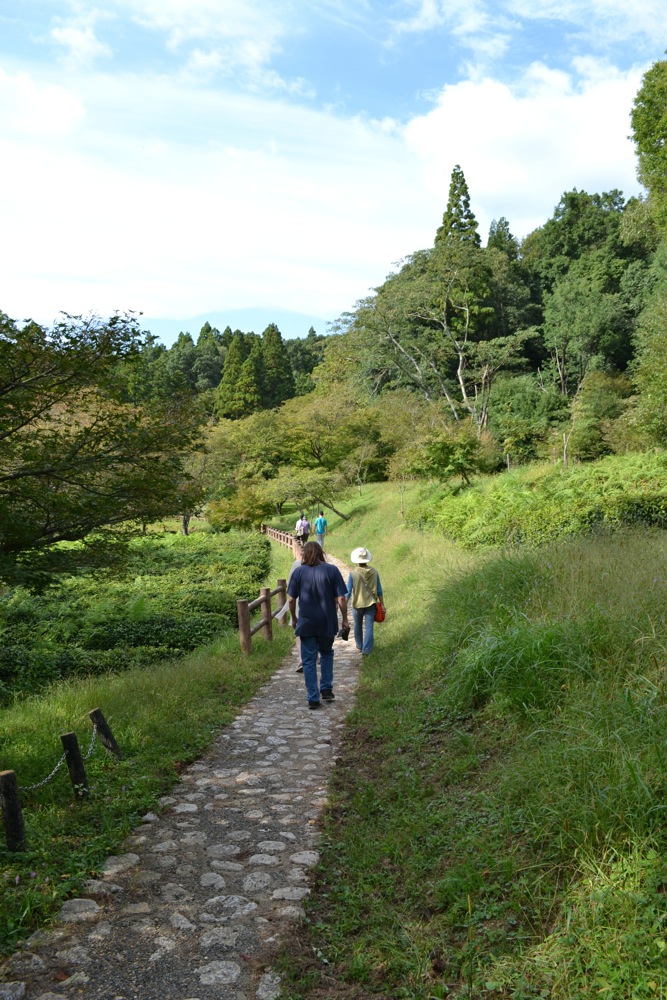 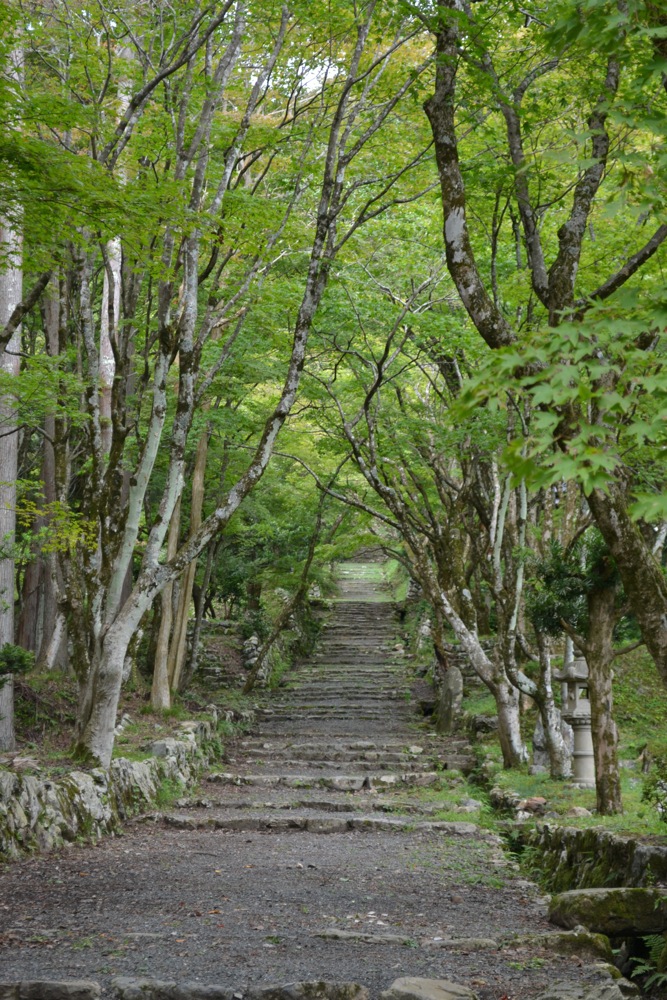 A vacant temple, but surrounded by beautiful Japanese Maple trees. It has recently become a popular destination during the changing colors in fall.

Next we stopped by the historic business district of Kinomoto town. There are several local business who have been operating for literally centuries here. We stopped at one such location, a 150-year-old soy sauce brewer called Daiko Shoyu. 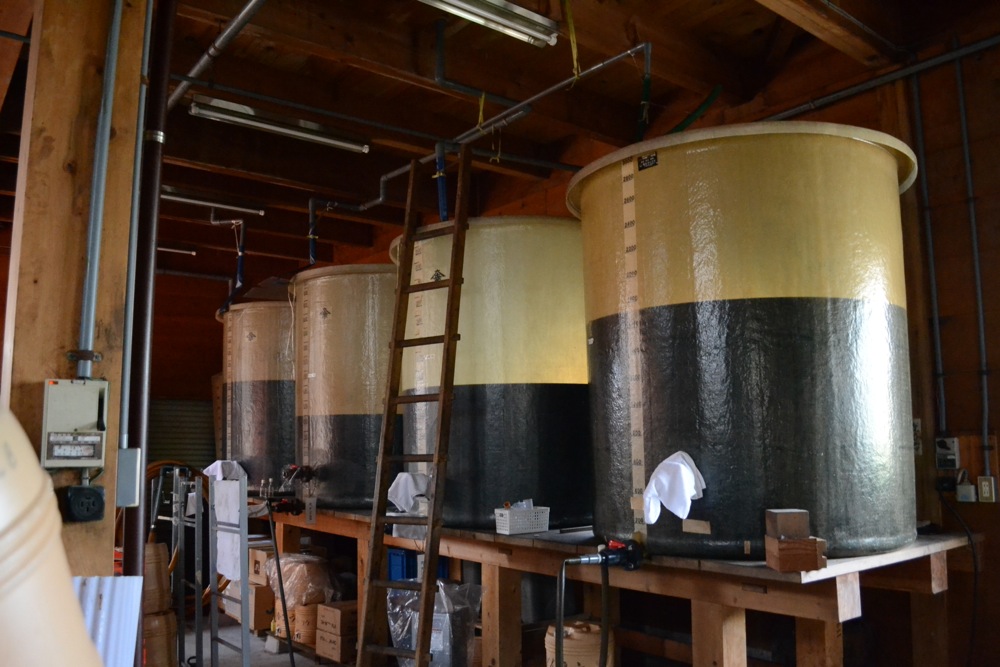 These batches are already brewed and will soon be bottled. Great smells in here! 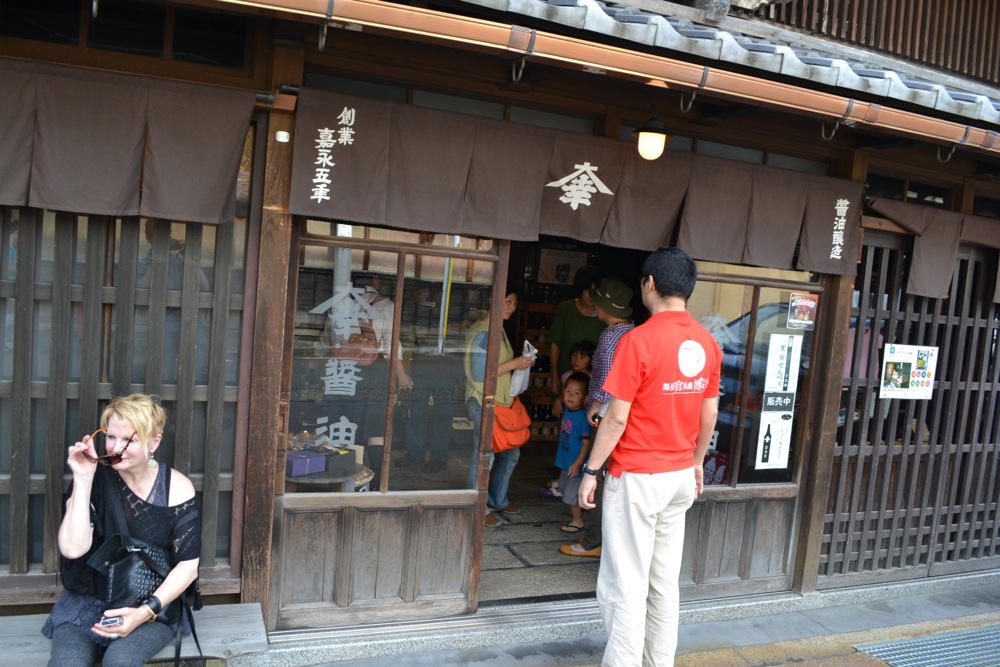 So this is where we called it a day. We hoped to fit more into the trip as there is plenty more to explore around here, but we’ll have to save it for another article.

The Michigan artists all had as much fun as we did, and I’m inspired by their energy since their schedules were packed full of events almost every day of their stay. Hopefully they found some inspiration along the way for future works. And speaking of their works, for more photos of their time here, the gallery exhibitions, etc.. head on over to the AFTL Facebook page.

Lastly, a map of the 3 main stops on our trip (click the markers for details):