From omikuji to praying after a donation, there are many things to do during Hatsumode, your first Shinto shrine or Buddhist temple visit of the year. This first visit is very important for the Japanese, as they prepare for the oncoming year and wish for good luck. It serves as a day of interaction with others and a chance to focus on your life and the lives of those around you. Although many people plan their visit for January 1st, it is not limited to only that day; some choose to go later for a variety of reasons such as a desire for a less crowded experience.

When I travelled to Taga Taisha last month for the 2016 New Year, a famous and important shrine in Shiga, it was already January 6th. A friend of mine went to this same shrine on the 1st, and our experiences were a little different. On the 1st, she squeezed and shuffled through crowds of people in the surrounding streets for food and toys, and inside the shrine for various charms and the chance to pray. Regardless of the day, however, the importance of Taga Taisha is the same. Taga Taisha is a Shinto shrine that encompasses several smaller shrines and also temples in its grounds. The main hall enshrines Izanagi and Izanami, the Shinto god and goddess who created the islands of Japan and bountiful other deities, such as Amaterasu, whom the Emperor of Japan is said to be a direct descendant of.

Taga Taisha’s long history was evident to me as soon as I saw it; although many of the buildings have been replaced due to fires and other reasons, its grandness has not been lost. The large stone gate, lanterns, and statues are only the first to impress, and passing through the gate then walking around the rounded bridge to inner gate, I was struck with the beauty of the main building. When someone who knows nothing about architecture stops and is taken aback by a building’s beauty, it has to be pretty amazing. 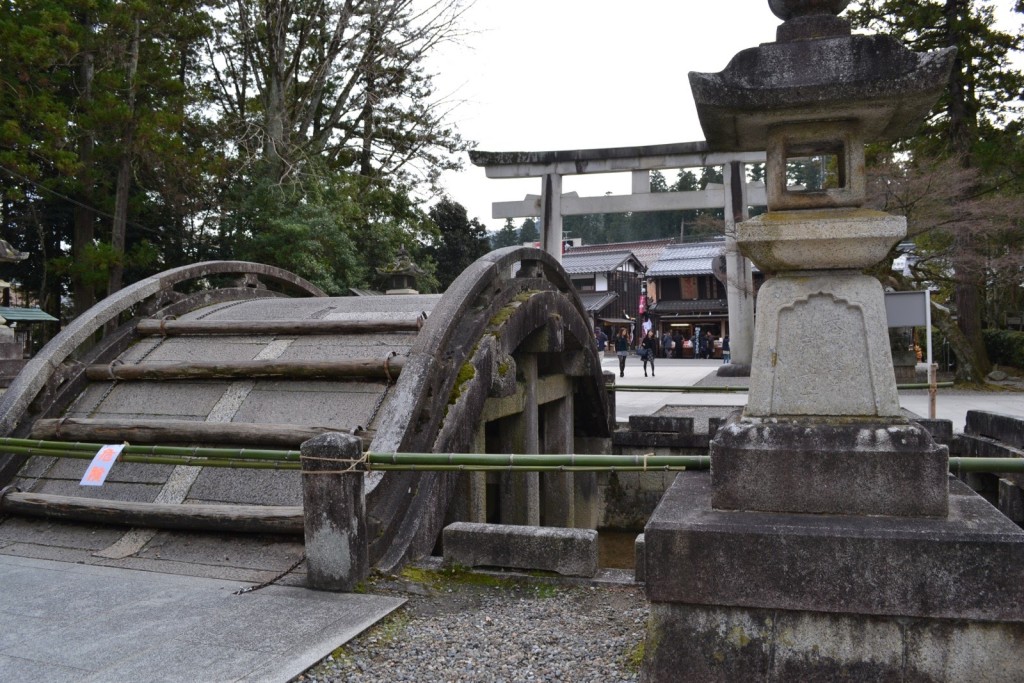 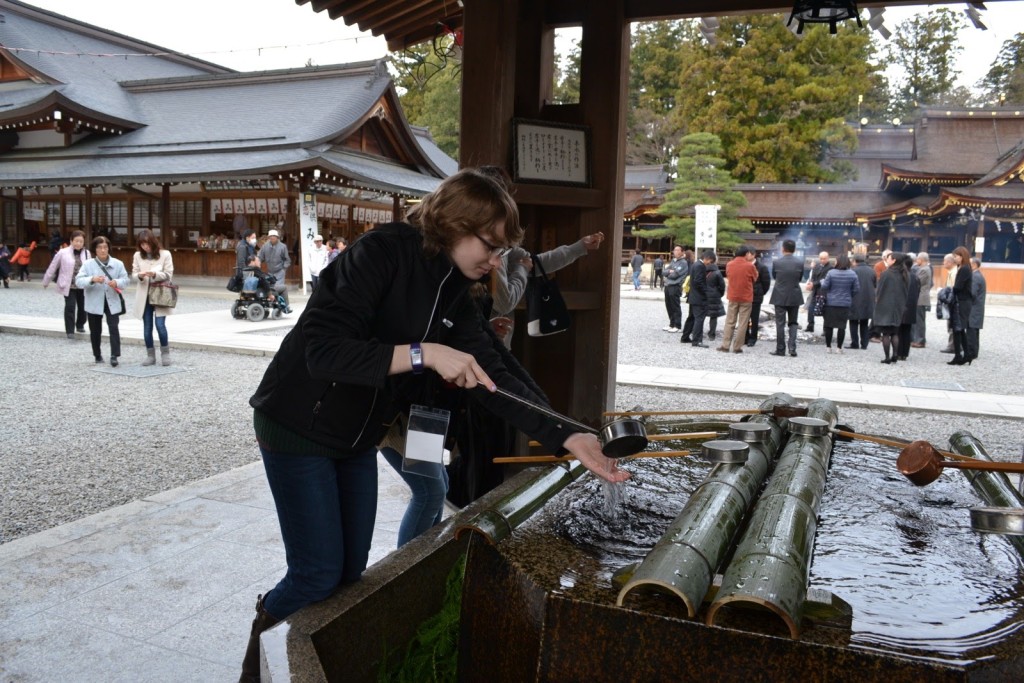 Before approaching the main hall to pray, however, I had to wash my hands first, a practice called temizu. First the left hand is purified by pouring water over it from the ladle in your right hand and then you repeat the process, swapping hands. Next you pour water into your cupped left hand and wash out your mouth, not swallowing the water but quietly spitting it out at the side. After that, you let the rest of the water run down the ladle stick as you hold it vertically before returning it. Those who have done it many times require no explanation for temizu, but I was glad that I could rely on my memory of previous visits to shrines where the process was explained in English. Another reason I was so self-aware when doing this is because I am left-handed and wanted to wash the right first! Being left-handed can make certain practices difficult when specific hands are assigned specific parts such as in tea ceremony. 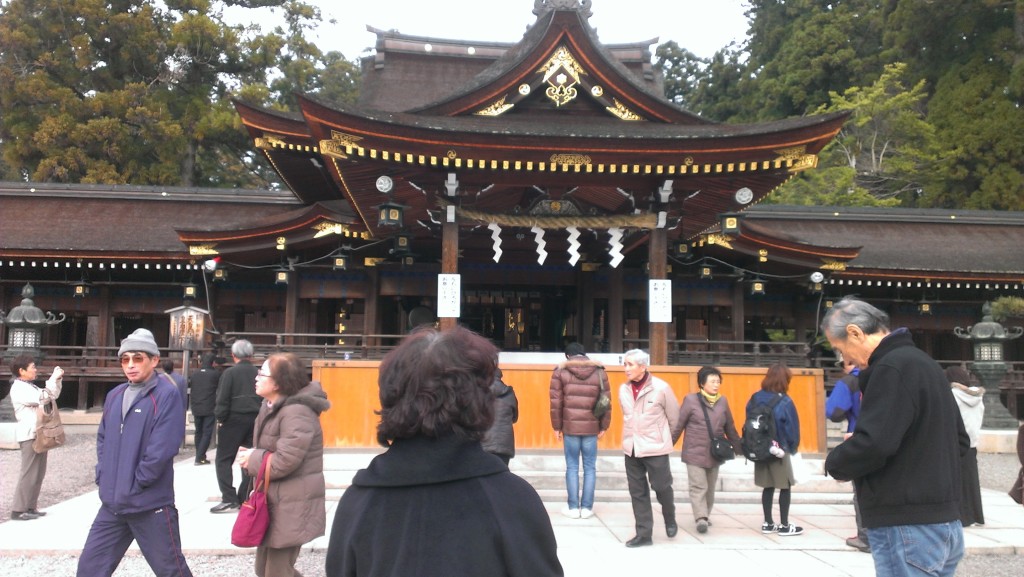 I was really excited for my first time praying at a shrine; the pattern of coin-bow-bow-clap-clap-pray-bow was something I had read about many times and I was ready to give it a whirl. Many Japanese have told me that when giving the coin donation, using a 5 yen or 50 yen coin is good because of the number 5. Thanks to the need to count and be careful of getting the practice right, I felt like I was really taking the time to think about the future and gather myself, hopefully cementing my prayer! 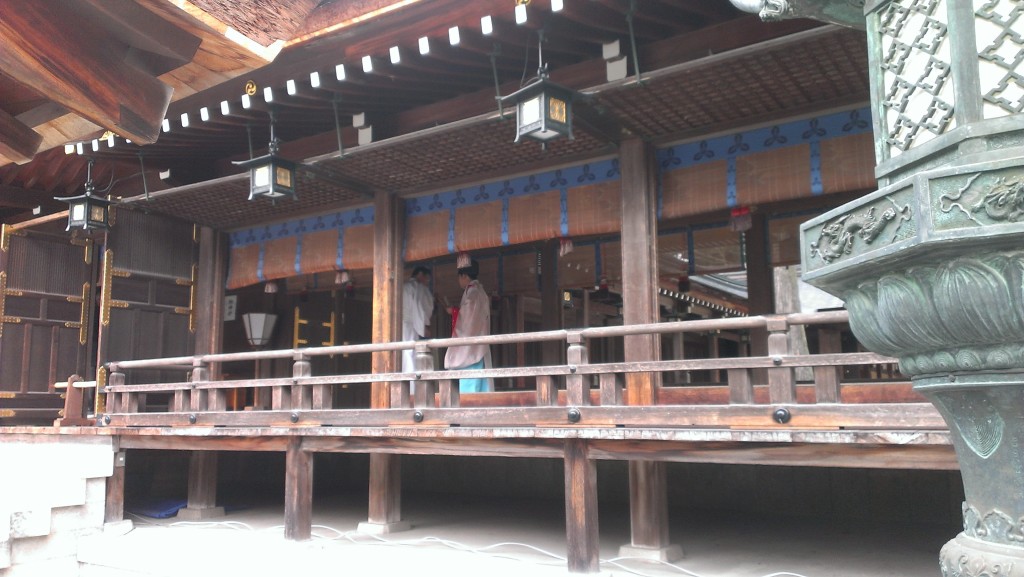 While many find the bow and clap prayer enough, sometimes people will choose to donate extra, paying to be part of a more personal prayer. In these cases, there is usually a significant reason for choosing to do this, such as a bad turn in company business. These shrine officiants were preparing for a ceremony being held for a newborn child.

Little did I know, but I have been in Japan during my yakudoshi! Yakudoshi means “unlucky year”, and it is believed that men and women have certain ages which they are more prone to bad luck and unfortunate circumstances. According to the sign at Taga Taisha, men should be careful when 25 years old and 42 years old. For women, these years are 19 and 33. After seeing this, I made up my mind to get a charm as protection. 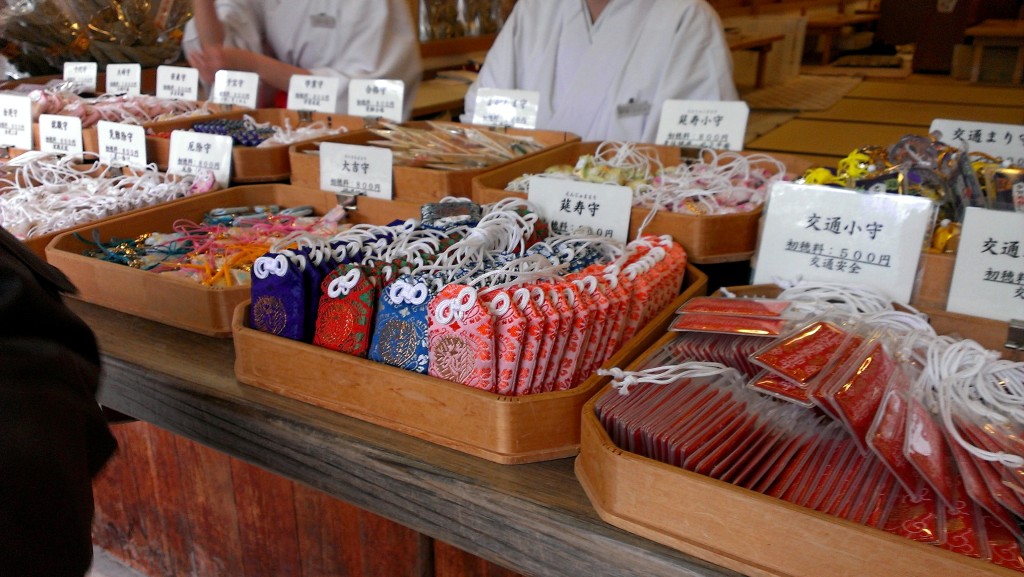 There are many different types of omamori, or good luck charms, to choose from. Some, like the four differently colored matching ones pictured, are for overall protection and happiness, and some can be as specific as fertility, final exam success, and yakudoshi. 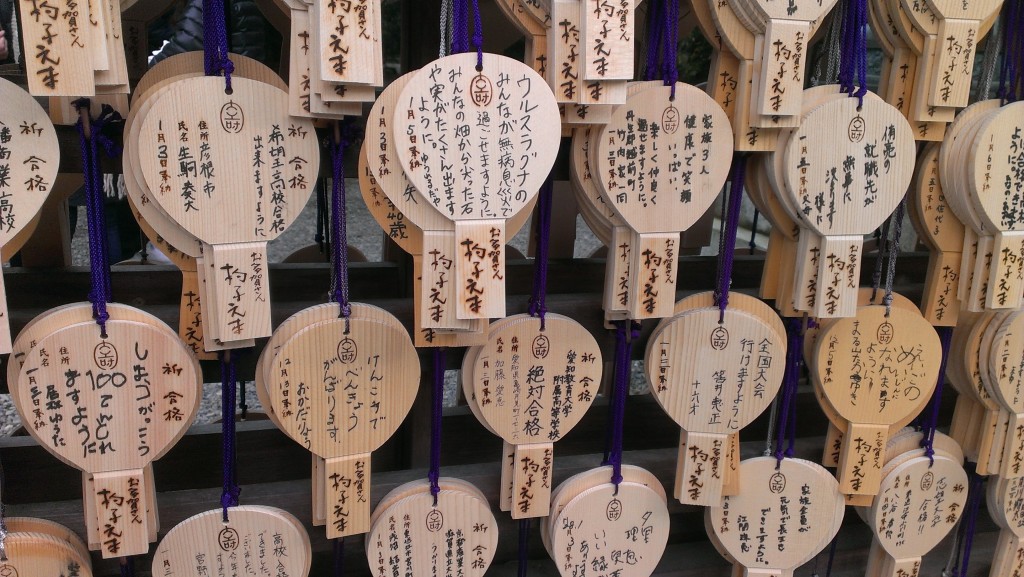 Others choose to bypass the omamori in favor of ema, or wooden plaques. This seemed like a very popular choice for those taking entrance exams. Two other types I did not get a picture of are the hamaya, which resembles and symbolizes an arrow, and the fukukaki, which looks like a rake. Seeing rows and rows of these really creates the new year atmosphere full of people, high hopes, and happy feelings.

Possibly one of the most popular things to do during Hatsumode is getting an omikuji. The fun of shaking a container to pull a stick with a mystery number on it, combined with the suspense of waiting in line to receive the matching fortune is an experience I knew I needed to have. The best part is that these fortunes are usually rather cheap, not more than a few hundred yen. A lot of the text is written in old Japanese that most skip over, as the most important part is put in big characters. This is what mine looks like! I got pretty good luck – not the best, but middle. Many people, especially if they are received a bad fortune, will tie it on one of the strings in hopes that will help their luck. These strings, filled with everyone’s fortune, really add to the feeling of Hatsumode!

As I mentioned, there are many smaller shrines encompassed in Taga Taisha, which serve specific devotional purposes such as economics, trade, children, and world peace. Depending on your interests and needs, you can choose to seek out one of the smaller ones and pray here as well. Everything is very versatile! There are many ways to seek good fortune in the new year.

Of course after one visits a shrine for the new year, it is considered polite to bring back something for those at home. Taga Taisha’s famous food is itokiri-mochi, a sweet mochi with stripes and a popular souvenir in the area. 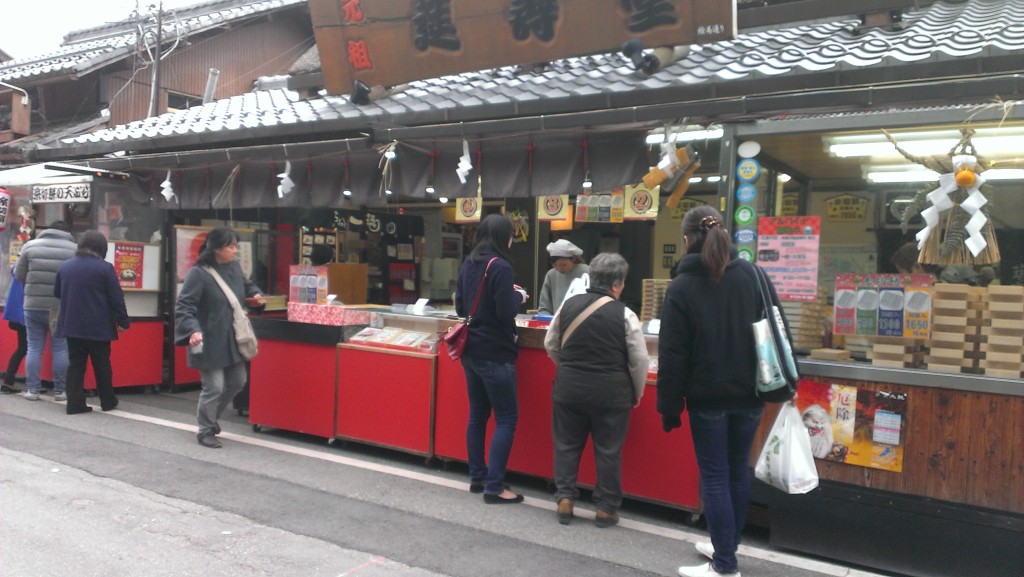 However, the Hatsumode is full of choices! If the shrine seems a little too busy, you can also head to a temple, which is what I did next…

Continue reading with the page link below