About a year ago I first visited the enchanting gallery ‘Kazenokobo’(風野工房) of textile artist Koji Noda and his wife in the scenic hills of Eigenji, Shiga. I was there to see a display of his wall and door hangings which didn’t disappoint with their mix of colourful geometrical shapes and black graphic lines in great modern contrast to the natural airy fibers used in the fabric.

Being made to feel at home with warm tea and sweets offered at the long wooden table running the length of the gallery, we soon settled into conversation. The Nodas talked of their earlier life in Kyoto and move to Shiga along with a brief history of their art while I shared my experience and interests in Japan. I was then asked whether I knew of another foreign lady living in Shiga named ‘Rebecca’, who had been living in nearby Hino for around 30 years. On saying I didn’t, they rummaged out from their shelves a book titled ‘At Home in Japan’ which Rebecca (a friend of theirs) had written a short while before.

Promising to return the book when finished, I took it home – along with some of Noda san’s beautiful fabric squares. Within the following week, I read from cover to cover the story of a lady who had deeply immersed herself in the traditional livelihood of Japan. She wrote and drew (yes, great illustrations) about it with a warm, familiar diligence – despite at times being at odds with the many cultural trials she faced.

Fast forward another year, and I found myself back at ‘Kazenokobo’, this time with the Be Wa crew, to visit the first solo exhibition of the ‘Rebecca’ (Rebecca Otowa) I had read so keenly about.

To describe the feel of her works, there was one painting in the exhibition that I think says a lot. It’s a composition of three self-portraits that trace her life experience thus far. First is the frustrated, crying child who grew up as a bit of an outsider in the United States and then on to Australia with her family. Next is her depicted in the style of a traditional Japanese female mask, which covers her education about Japan and decision to move here (where she was to meet her future husband). Marrying into a Japanese family living in a traditional household (of over 300 years old!), she often found herself having to adjust to the way things were done and therefore found her first 20 years here to be a steep learning curve in the customs of being and becoming ‘Japanese’. Now, after all the give and take, lessons learnt and enjoying the growth of her own household, Rebecca (just on turning 60) is finally able to present herself as she is with a sense of release, personal enlightenment and freedom that brings with it a huge surge of freshness and confidence – and this is what seems to bring her very bright and insightful works to life. 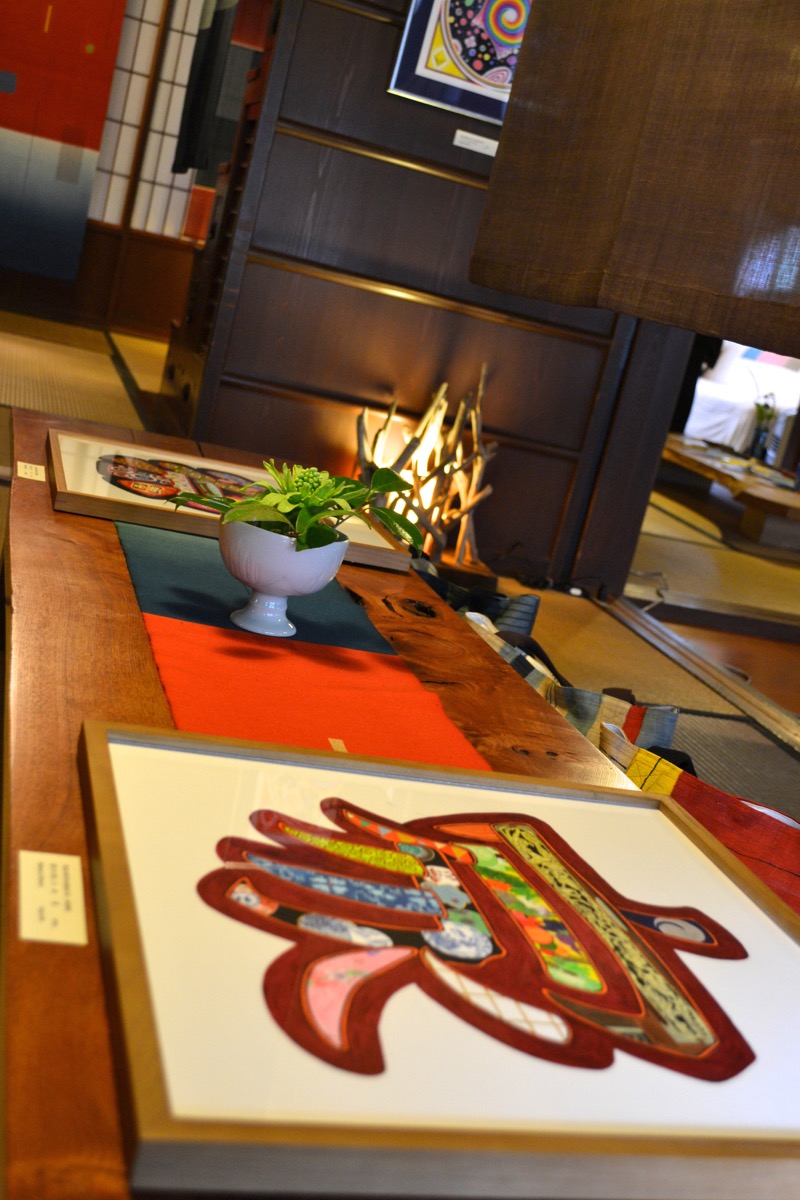 Many of her pieces seem to have a mystical thread to them. There are paintings about the life cycle, of parts incorporated from other cultures and religions, of pictorial interpretations of kanji filled with Japanese elements and of the growing complexity of shape forms against expanding background perspectives. Rebecca has also employed the technique of using water colour pigments straight from the tube to retain their vividness to help communicate the energy and spirit of her works.

When asked what she would like others to take away from this self-revealing exhibition, she says in a calm, inviting tone, that she’d like people to enjoy her works. It’s a nice mix of person and expression Rebecca has reached. Through the challenges she has met and made her own, she has attained a kind of self-satisfaction and grace that radiates warmly and humbly around her. Yet, on finding her own feet and confidence distinct from the conformity she has endured, she has fostered a fresh energy and strength that she is now ready to explore and exhibit.

Rebecca Otowa’s first solo exhibition was at Kazenokobo from March 19th to 23rd, 2015. Based on the number of visitors present interested in her art and the liveliness obvious in her new works, there should be more exhibitions to come. In the meantime, feel free to look for her first book ‘At Home in Japan’ via Amazon or Goodreads (which will soon be moving from hardcover to paperback, so get in quick if you’re interested!) or her latest children’s book called ‘My Awesome Japan Adventure’ (Simon & Schuster, Amazon) which showcases her wonderful illustration capabilities she has developed over her intense and varied time in Japan. Thanks Rebecca and the Nodas at Kazenokobo.