Every year, during the first weekend of October, the Art In Nagahama art fair is held in Nagahama (長浜市).  Within Shiga Prefecture, the city is located on the northeastern shore of Lake Biwa, close to Maibara and Hikone.  A popular event, the art fair has been running annually since 1987.  This year, it was held on October 3rd-4th.  From Nagahama Station, it’s about a 10 minute walk to Kurokabe Square (黒壁スクエア), which is the area where the art fair takes place.  Kurokabe Square is also known for its glass work, making this the perfect setting for a craft market.  During this event, the streets are jam-packed with both people and the tables that showcase the various items for sale.

Artists come from all over Japan to sell their wares here.  In fact, so many come that at one point there wasn’t enough space, so the number of booths had to be reduced from 200 to roughly 170.  Each craftsman’s work is unique, so there are many different kinds of art that can be found.  This could range from elaborate candle sticks made of glass, to pottery or wooden blocks with cute cats painted on them.  Despite it’s limited space, there are new artists that show up every year, so even if you have gone the year before, there are still new things to see and buy. 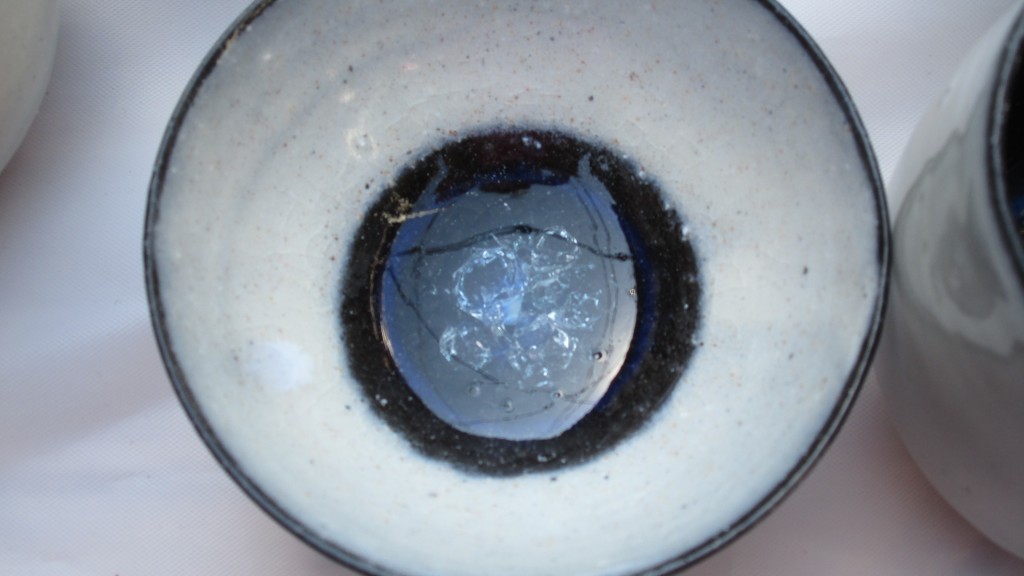 The most interesting thing to see when you are at these kinds of events is the different aesthetic views that the craftsmen have, and thus the different forms that their works can take.  For example, there were many booths that sold some sort of pottery, but each artist had their own idea of how it should be seen.  One person may create simplistic black vases that have a bumpy texture and cloud-shaped holes throughout it.  Yet another may go in an entirely different direction, creating sake cups where when you look inside, images similar to that of crystals unearthed in a mine, or a starry night sky can be formed in your mind.  Each artist has created their own little niche within a category of art, and one can only imagine how long each one has been working on these beauties, of how long it took to perfect the technique.  But just to give an example, one of the craftsmen, who created the sake cup in the picture above, said he has been doing this for about 10 years.

If there is one thing to learn about Japan, it’s that there is a mascot for pretty much anything and everything.  Art In Nagahama is certainly no exception.  Just last year, the committee incorporated a beaver mascot by the name of アートン (Arton).  And in true mascot fashion, his image was seen everywhere from flyers, to stamp cards and entrance ways, and even as art itself.

One of the cool things about the fair is that in addition to buying art, you can also witness it being created right in front of your eyes.  There was a slightly open space to the side of one of the streets where several larger-than-life murals were being painted throughout the day.  It’s a nice break to come and watch the painters at work for a bit after all the walking around.  And for those who like to get their hands dirty, there were also activities that people could participate in, ranging from chalk art to metal shaping.   So there is something for everyone.  And when it’s time to get some food, one is never too far away from a restaurant or a stall of some sort because the Kurokabe Square area has all sorts of tourist-friendly shops lining the streets.

All in all, this event isn’t just a place to walk around and buy things like normal stores, but one that the people can get involved in as well.  In this way, Nagahama’s art fair can become rather memorable, and entice visitors to come back the next year, hopefully along with their friends.  I myself enjoyed seeing all the amazing and various pieces of art for sale, and being able to hear more from the craftsmen themselves about their works.  It reminded me a little bit of the craft markets back home in Michigan.

For details about next year’s fair and other Art In Nagahama events, visit their website: http://www.art-in-nagahama.com/ (Japanese only).

And lastly, a few more photos from our afternoon at the fair: