Over two thirds of Japan is covered with mountains. These icons of the local landscape offer valuable resources and destinations for hikers, skiers and snowboarders, but also serve as symbols of the subterranean power of nature which created these islands and still continues actively affecting and shaping them even today.

In ancient times, Japan’s mountains were objects of worship in practices related to Shintoism and later spreading to esoteric sects of Buddhist as well. The general image of mountains as the sacred home of spirits and deities has remained over time, resulting in many temples and shrines built in, on, and around the mountain landscapes. Many famous ancient mountain temples still thrive today with support from visitors, yet many more have been less fortunate and have slowly fallen into disrepair or ruin.

For adventurous explorers, finding these forgotten temples can be a rewarding experience as the lack of other visitors often intensifies the serene solitude, and the lack of physical upkeep brings out a unique harmony with the surrounding nature that slowly envelops them.

Despite the vast numbers of these old mountain shrines and temples, their neglected nature inherently makes many of them difficult to find. But luckily one of our local friends, Yuta Fukuhara, is an avid explorer and nature guide around Nagahama and northern Shiga so he recommended one particular sacred mountain hike for a recent outing together. 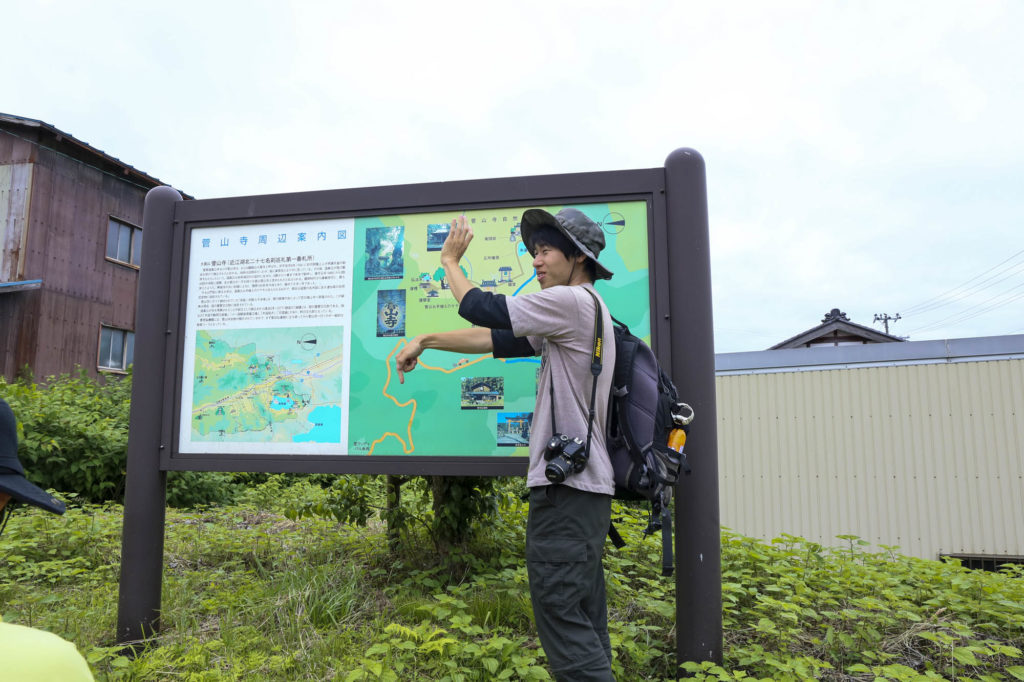 The chosen destination was Kanzan-ji, a 1300 year old temple atop a small mountain in northern Nagahama. Our guide Yuta lives nearby and enjoys this hike partly for the temple’s history, but also for the unique and diverse deep forest covering the mountain. 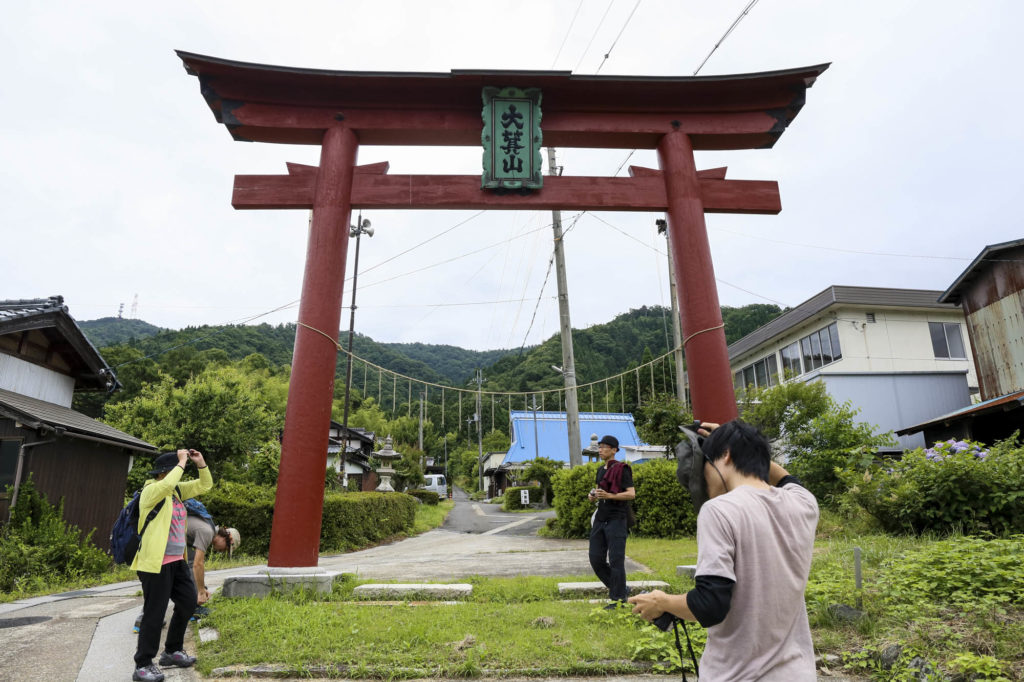 The route begins at a large red torii gate but despite this impressive entrance, I’m guessing some nearby locals don’t even know it’s here since it’s tucked away on an older village road. As soon as we began the hike the forest basically swallowed us up and transported us into its own little world.

Early on we began seeing the first of many small Buddhist statues along the trail up the mountain. Yuta explained that these actually correspond with the 88 temples of Shikoku which comprise a famous pilgrimage route. Our failed attempt to find and count all the statues at least offered a fun way to stay focused on our surroundings and enjoy the scenery. 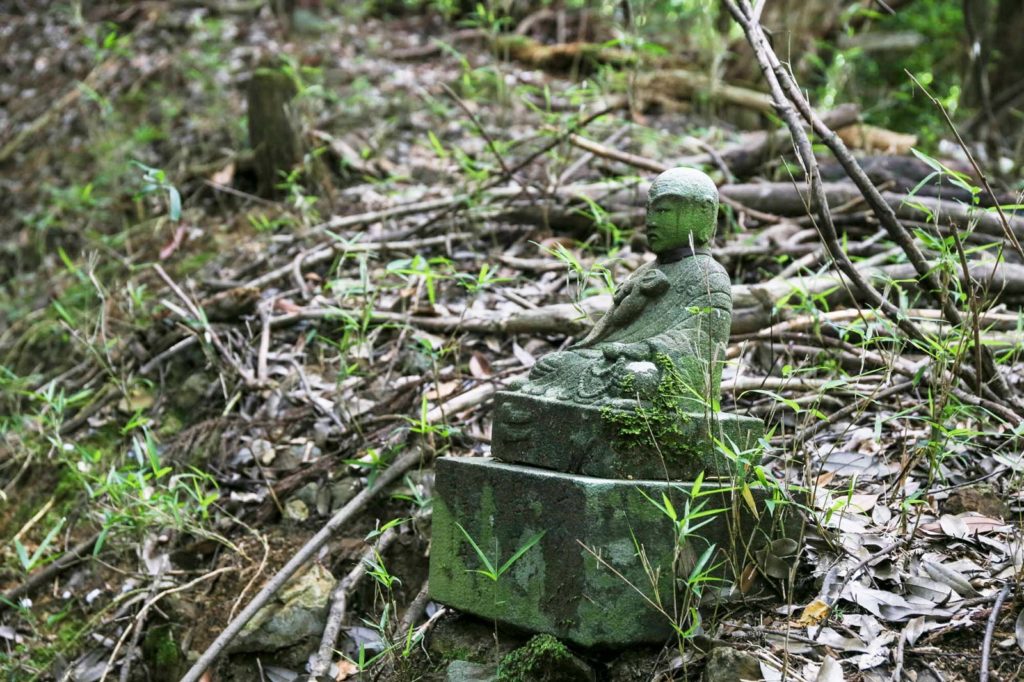 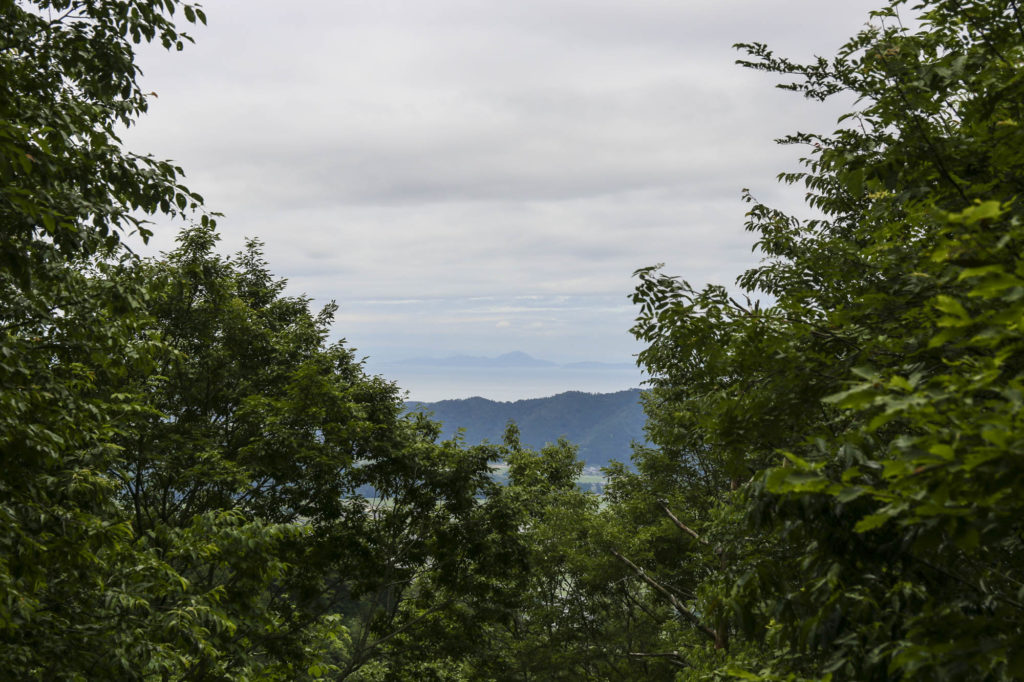 While leading the way up, Yuta also shared some of the history of Kanzan-ji. I won’t give away all the spoilers, but the inception of the temple is worth at least sharing the short version: Apparently 1300 years ago, the Japanese Emperor wanted to build this temple after seeing it in a dream, but not knowing where the location was in real life, he assigned scouts who were eventually able to find the location and soon after they began constructing it.

The temple area is a little ways past the mountain’s summit, and there is a Shinto shrine nearby as well as a natural spring which feeds a pond and some small open meadows. The mix of sub-tropical, seasonal hardwood, and some evergreen trees create a very unique forest atmosphere. It reminded us of something out of a Ghibli film, like the setting of Princess Mononoke. That film was modeled after the Yakushima Island rainforest off the southern tip of Kysushu, but this area has a similar atmosphere of deep rich nature that feels almost enchanted. 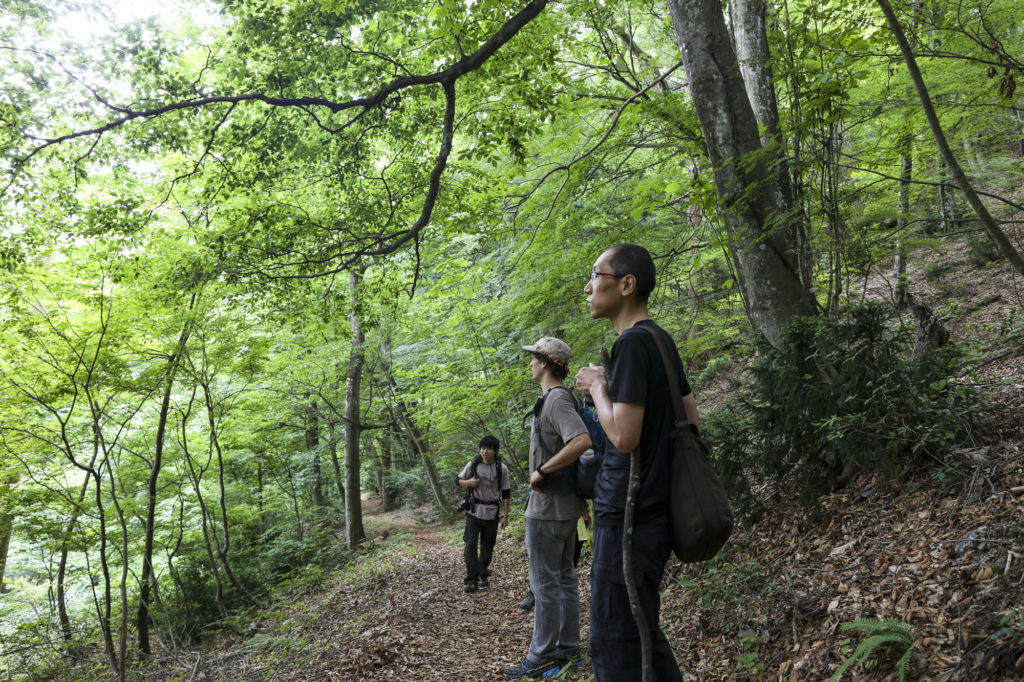 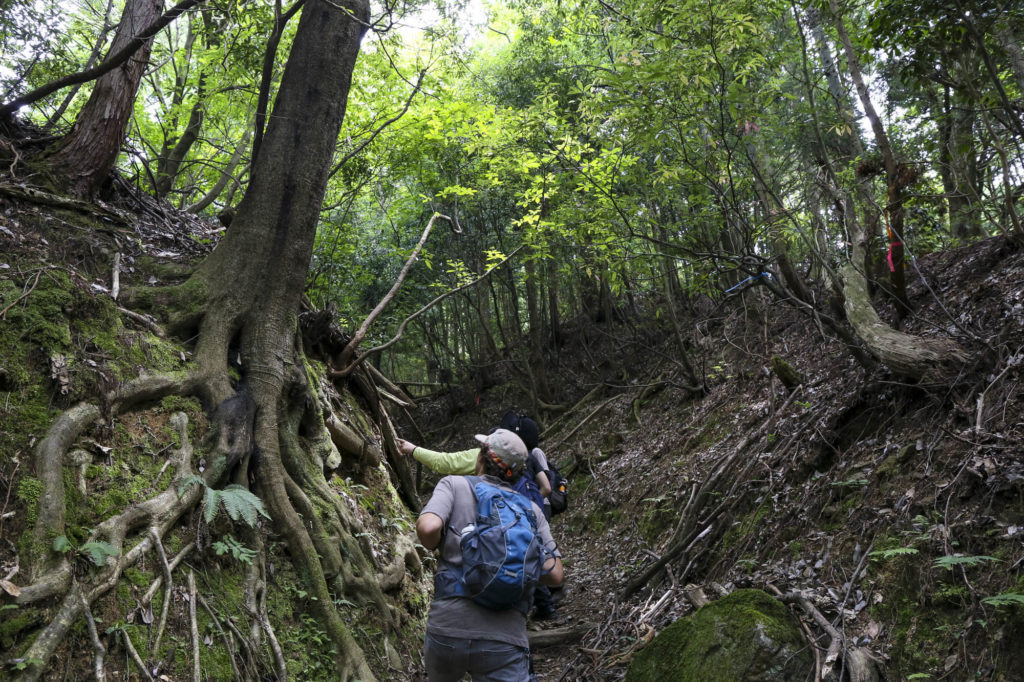 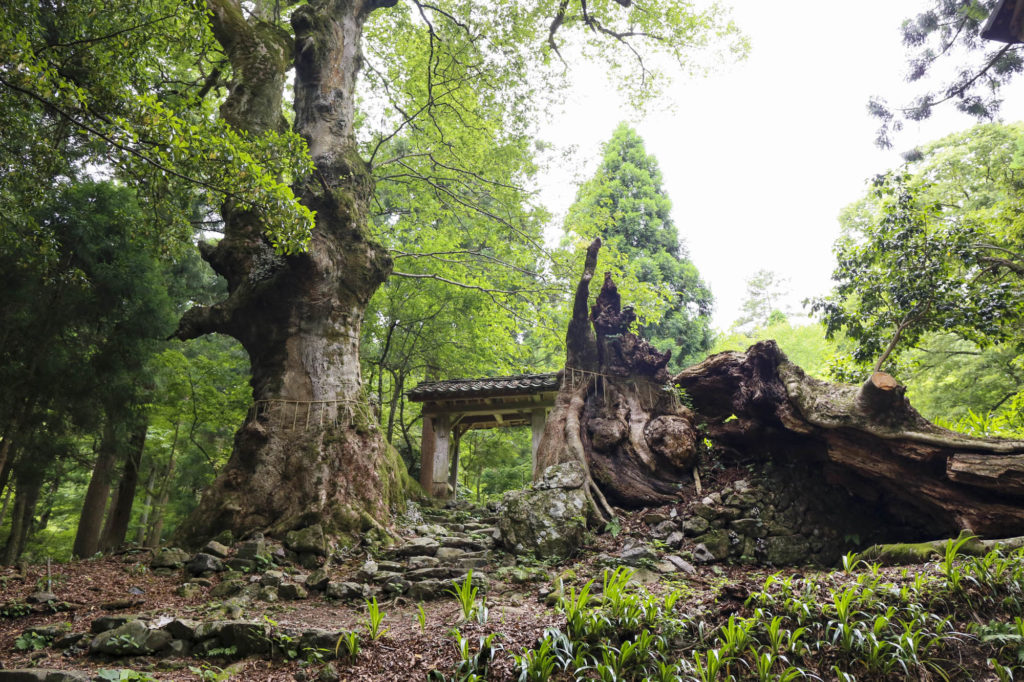 One key attraction is this pair of gigantic trees at the temple gates which are over 1,000 years old. Sadly one of the two trees came down in a storm recently. Still an impressive sight in their current state, especially in person, and hopefully the one still standing has plenty of life left in it. 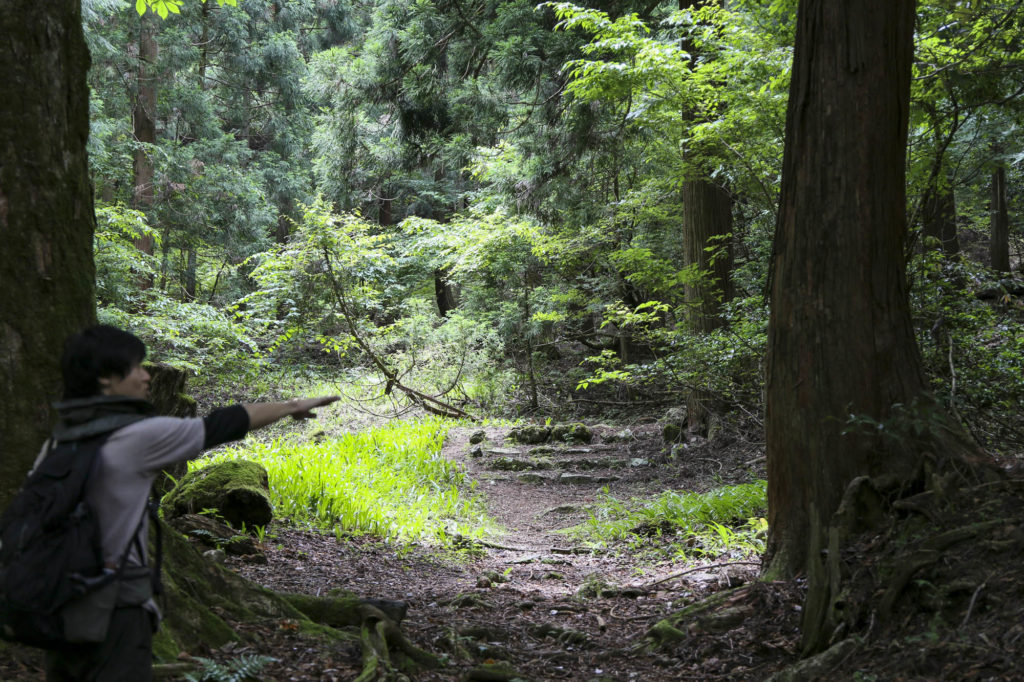 Many of the temple and shrine buildings have fallen into various stages of disrepair without any caretakers or monks for years, so the buildings cannot be entered for safety reasons. I guess wooden buildings in deep forests require contsant upkeep, especially considering how much snow this area gets in winter. They’re still structurally intact for the most part, but some have roof or structural damage which may soon be beyond repair. But even without going inside, the solemn atmosphere and energy really extends to the entire area, and it provided an amazing backdrop for our rest, relax, and a lunch break before our trip back down. 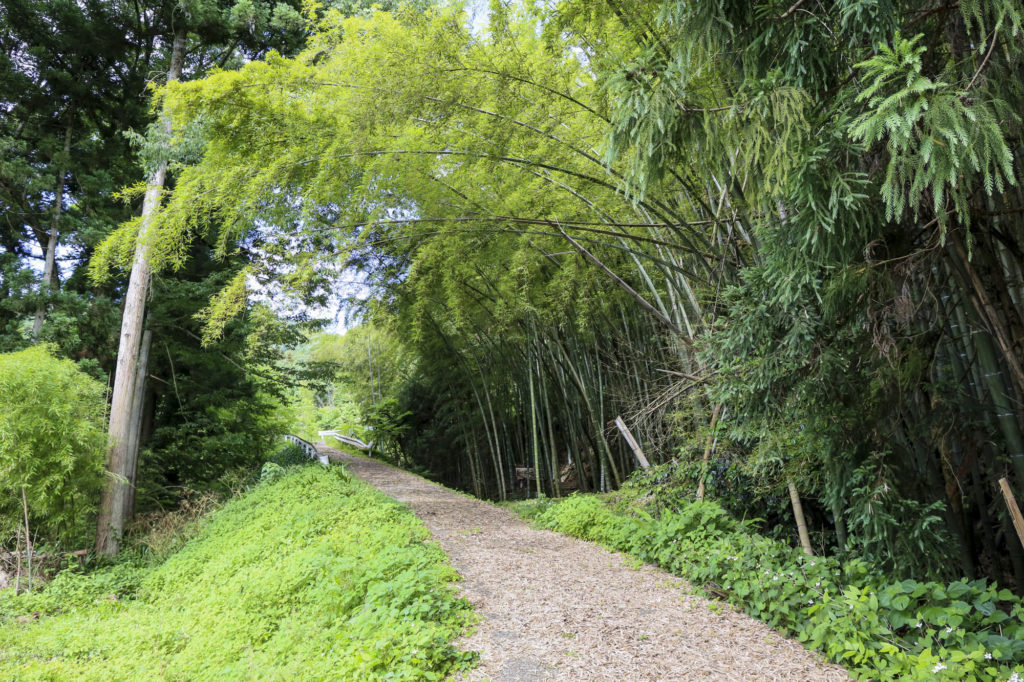 The hike ended up at about 4 to 5 hours from start to finish: 2 hours up, an hour for lunch around the temple, an hour down, and a little more time stopping for photos, breaks, etc. So it can be done in a half day pretty easily but still offers a good workout as the trail can be steep at times and somewhat overgrown. I’d recommend this for anyone looking to get lost in nature or explore hidden temples and doesn’t mind some physical exercise to get there as it’s well worth the effort. The whole time, we only saw one other group of hikers who had also come searching for a nice remote area for wildlife photography.

Some of our Be Wa team members are actually involved in a project with Yuta and some other folks to provide these types of tours in northern Shiga, so when we’re ready to share more, we’ll be sure to announce on Be Wa. In the meantime, if you want to try going it alone, you can start from Yogo station and either rent a bicycle there or walk about 25 minutes to the start of the trail. There is a basic route map at the trail head, and sometimes signage where the trail intersects with other trails, but you’d at least want a GPS device and maybe a paper map if you’re going solo.

Route from Yogo Station to Trailhead:

Note: Google Maps final destination point is a little off, but should at least get you to the big entrance gate. From there just go straight back and up through the highway underpass and follow the trail signs of Kanzan-ji ( 菅山寺 ). Good luck!