Fall is the season of the leaves changing color, but is also the season of preparation. During this time, gardeners across much of northern Japan partake in an old technique that has been in practice since the Edo Period (江戸時代). This technique is called Yukitsuri (雪つり). This is where a series of ropes are strung over trees in an umbrella-like appearance to protect them from heavy snow during the winter months. This is mainly popular with Japanese gardens, because the trees are often very old and brittle, and were grown and pruned for aesthetic beauty at the expense of branch support, so they are much more susceptible to breaking.

One recent Sunday, I went to Seigan Temple (青岸寺) in Maibara (米原) in order to help the volunteers who were working there that day. From Maibara Station it’s just a couple minutes drive or 5 to 10 minutes on foot. Maibara is among the southernmost regions where Yukitsuri is typically practiced, because south of here the snowfall isn’t nearly as heavy. Of the 15 or so volunteers who gathered to help, many were affiliated in some way to the Kyoto University of Art + Design (京都造形芸術大学, link), where some are currently enrolled and others are graduates and former classmates of the landscaping and garden design program. As such, they wanted to be a witness to how Yukitsuri is done.  Unfortunately, not many people know how to do this, so it makes an interesting experience to see it first-hand. To put the rarity this knowledge into perspective, the head gardener, Mr. Nanjou, came all the way from Yamanashi Prefecture (山梨県) which is near Mt. Fuji. It can be a little difficult because it requires teamwork and precision, so it’s actually quite easy to make mistakes. 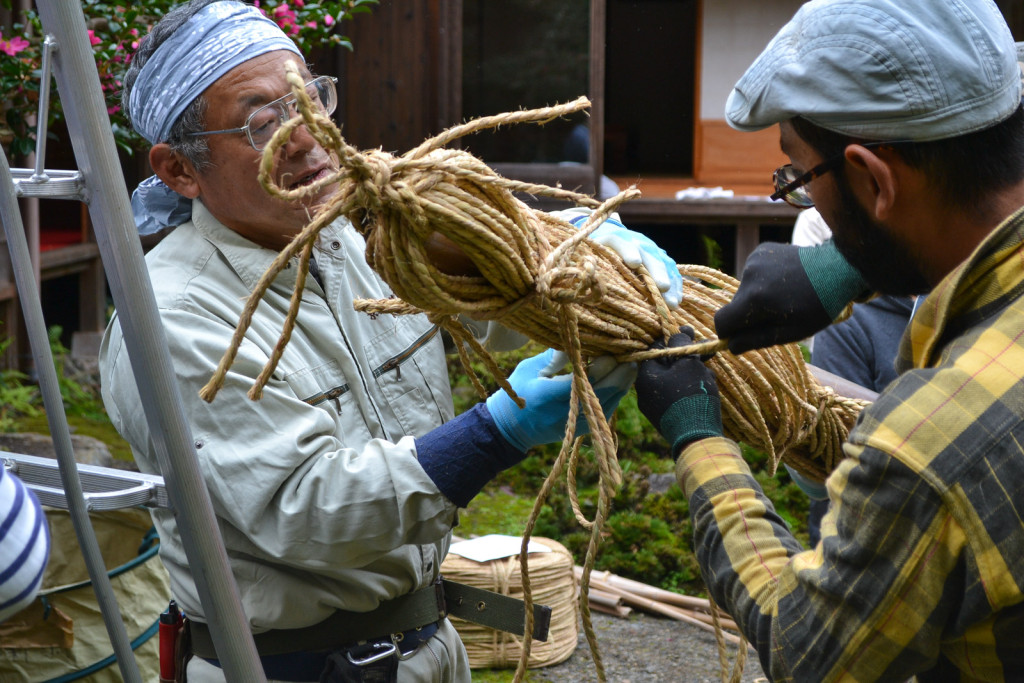 Yukitsuri is a process where much is involved, and can be an all day event depending on how many people are there to help and how many trees you want to protect. Like many things in Japan, the secondary priority when setting up the tree’s support is to still keep it aesthetically pleasing. So the first thing that needs to be done is to clean the area up a bit. With whisk brooms (てぼうき) or your hands you brush away all of the dead leaves or pine needles, along with anything else that shouldn’t be there. The same is then to be done for any nearby bushes and rocks. Once this is finished, you can start working on the support system. It’s basically a long bamboo beam that stands at the center followed by even longer ropes that are tied from the top. When preparing all the necessary rope, it had to be made at a set length, longer than the beam so it could be tied down to the ground at an angle. When the desired length was achieved, it was looped about 10 times. This determined how many lines would be around the tree. If this isn’t done enough times, the structure would be inadequate of protecting the tree from the heavy snow. 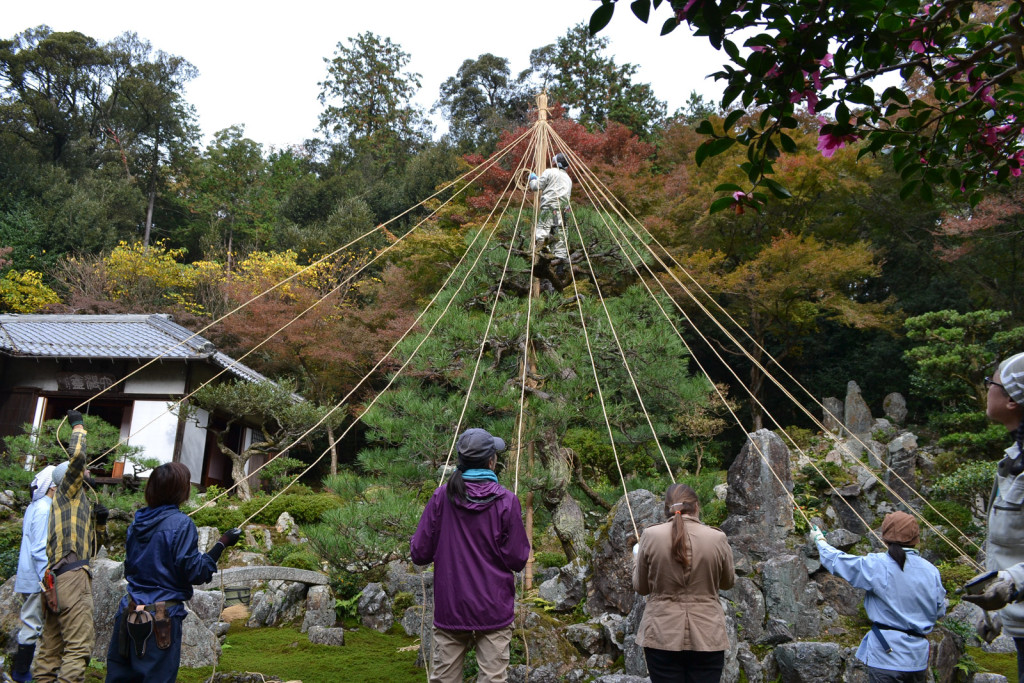 After that, the rope was tied at the top of the pole, and everyone hauled it to the tree. It had to be positioned so that it was as center with the tree as possible. From there, Mr. Nanjou climbed to the top and started to untangle individual rope lines and throwing them down to us. Teamwork was especially important at this point because each rope had to be lined up in order, so we all had to hold them in place so that as Mr. Nanjou was untying more lines, they wouldn’t get jumbled up with ones he already threw down. We also had to make sure that the ropes dropped down to us were evenly spaced out so that it was pleasing to the eye. 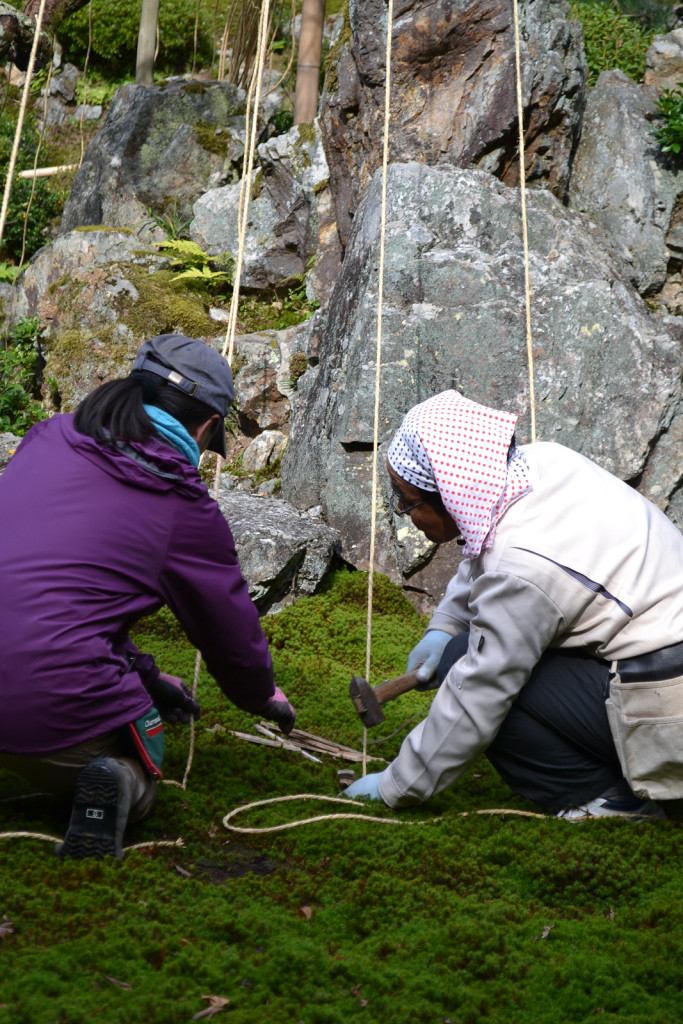 During this process, some volunteers would start to tie down untangled rope by making a knot (むすび) around a bamboo stake and hammering that into the ground. Believe it or not, tying these knots was much harder than it looked. Even people who have done it at least once before sometimes had trouble remembering how to tie it.

Once all the ropes were staked down, the final step was to clean up. Rustling around in the trees of course brought down more debris, so everyone helped to sweep it up. It was important to keep everything looking pristine because this garden is a big attraction for visitors who look upon it from inside the temple building. So the garden needs to convey a balance of both tidiness and natural beauty.

All in all I thought it was an interesting experience to be a part of the Yukitsuri process. I was impressed that, honoring the theme of natural beauty, only bamboo and rope were used instead of sturdier man-made tools. Or how despite the neat and simple final look of the ropes, there were some unpredictable problems as we went along and thus judgement calls had to be made.For example, sometimes rock formations were in the way of where the rope line needed to be, so in those cases it was decided that those lines were tied to nearby bushes or the bottom-most branches of the tree. Everyone worked hard to provide protection for the trees we worked on, and I think it really shows. Back home, trees are for the most part left alone, unaided by man.  The only instance where we interfere is when the trees are young. For example, support may be given so that a new tree planted at a park grows straight. Or a small fence is built around young trees in a forest so that the deer can’t eat all the leaves and cause it to die. So therefore the idea of Yukitsuri was an interesting concept to me. And overall I’m glad that I could be a part of this rare opportunity.