Last weekend, Belinda and I embarked on a day of rice-centric events in one of the key rice-producing regions of the ricey-est(?) nation on Earth! From planting ceremonies to sake workshops, it was a day to appreciate the many uses for rice developed and perfected over centuries of Japanese tradition.

Sunday morning in Yokaichi was the town’s annual Shinto rice planting “festival” (although “ceremony” is probably more accurate). Otaue-sai ( お田植え祭 ), or sometimes ta-asobi ( 田遊び ) depending on the region, is a long-standing Shinto tradition marking the beginning of the rice growing season. Some such festivals are nationally famous, while others are simply local town traditions. Yokaichi’s festival is more the latter, but is organized by the picturesque Tarobogu Shrine complex ( 太郎坊宮 ) which overlooks the festival from Tarobo mountain.

“Tarobo” comes from the name of the tengu (human-like long-nosed mythological deity/creature) who protects the mountain. Perhaps we’ll write more on the shrine itself in a future article since it is really worth a visit on its own: supposedly more than 1,000 years old, a beautiful looping mountain path connecting the various statues and shrines, and a summit with a narrow path carved between a split megalith towering over the visitor from both sides. Legends say the two halves of rock will come together crushing any visitors who pass through with impure or dishonest intentions (hence it’s nick-name among local foreigners, the “Indiana Jones mountain”).

So back to the ceremony, in recent years, Tarobogu Shrine has been organizing the event together with a local high school. And the actual rice planting during the ceremony is conducted by the high school girls’ volleyball team (traditionally it was performed by young maidens). The past few years, the invitation has also been extended to the school’s foreign English teacher, who just so happens to be Be Wa’s very own Belinda Kyle, and to other local teachers/foreigners as a friendly gesture of cultural exchange. This years foreign representatives were Belinda, myself, and local teaching buddies Katie, James, and Francisco. 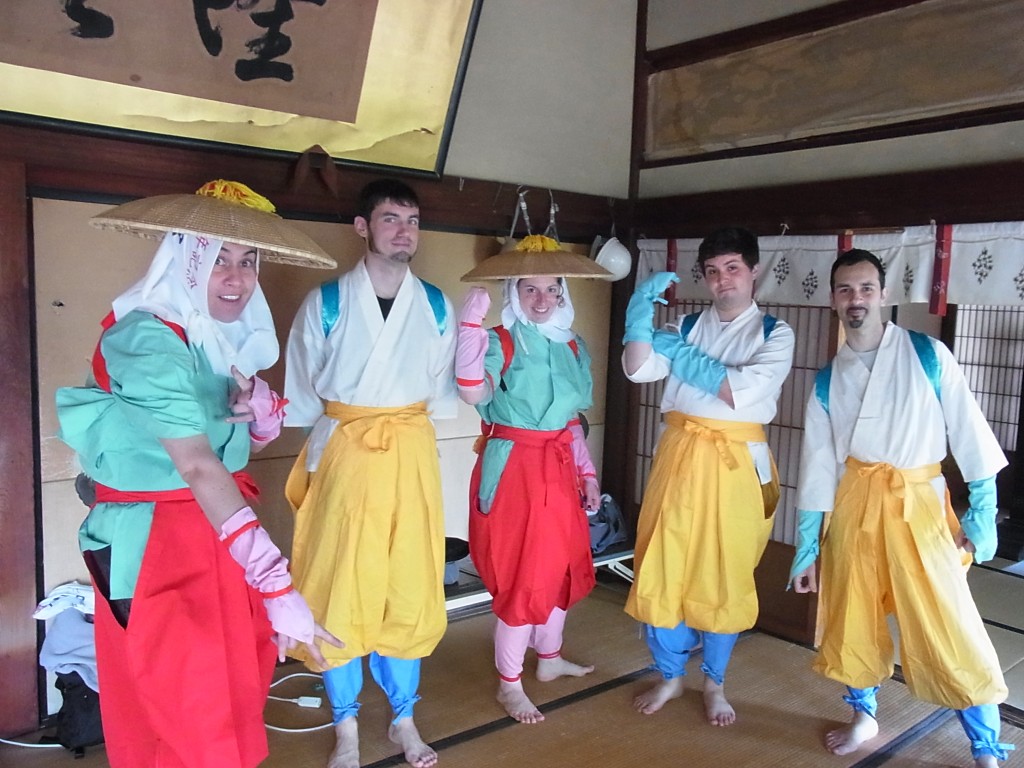 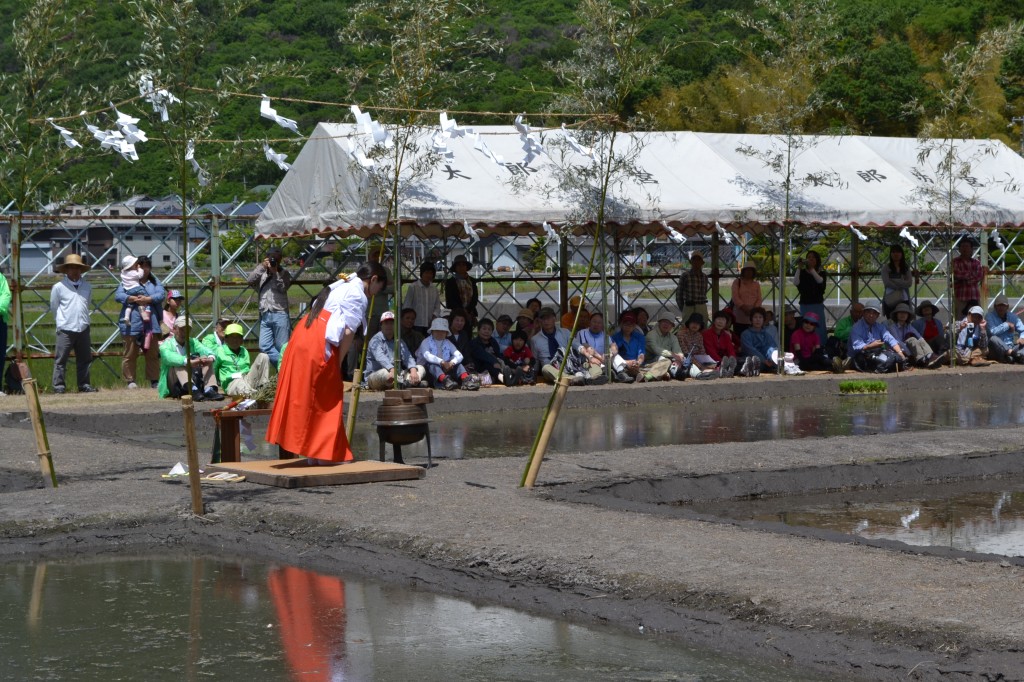 The ceremony opened with ritual offerings and prayers, followed by an impressive dance-like offering of salt and sake into the rice field performed by one shrine member in rhythm to an accompanying taiko drummer. 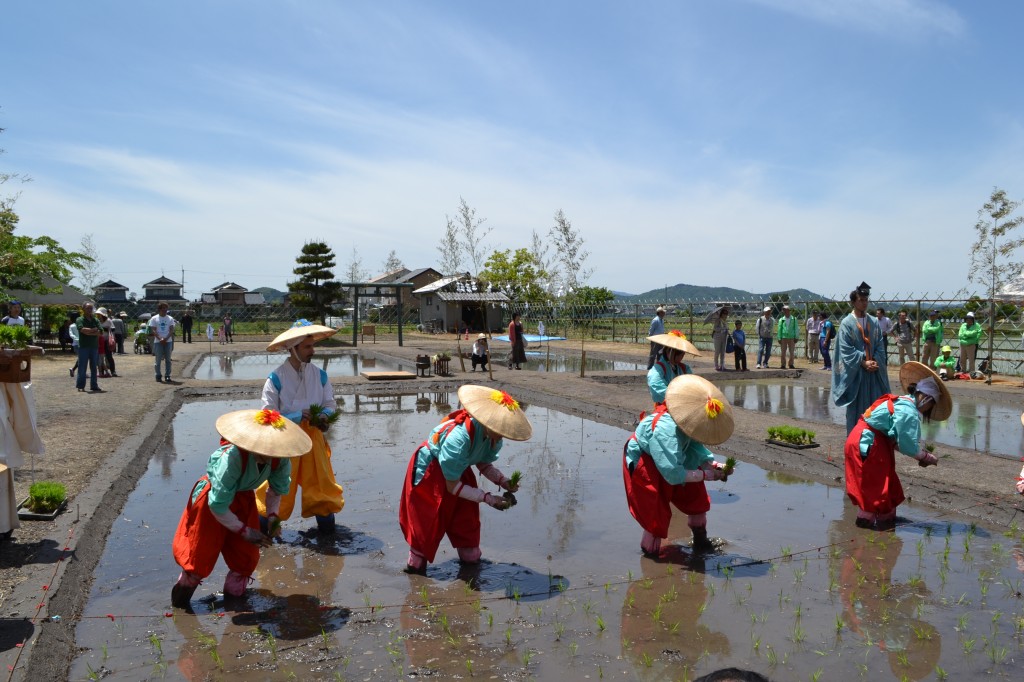 Then came our time to shine. We joined the high school girls in traditional (possibly Heian period?) costume, entering the rice paddy and planting the seedlings in rhythm to accompanying music. The hardest part was overcoming the first few barefoot steps into the flooded paddy, and learning how to keep our balance enough to move around the thick mud. After remastering upright movement, I could manage and even enjoy the feeling of the warm mud that got cooler, the further it pulled you down. Myself and the few other male participants were tasked with providing handfuls of seedlings to the planters, who are traditionally only girls and women. They had the more difficult job of getting the seedlings planted upright, in straight rows, and synchronizing their movements both with each other and with the music. 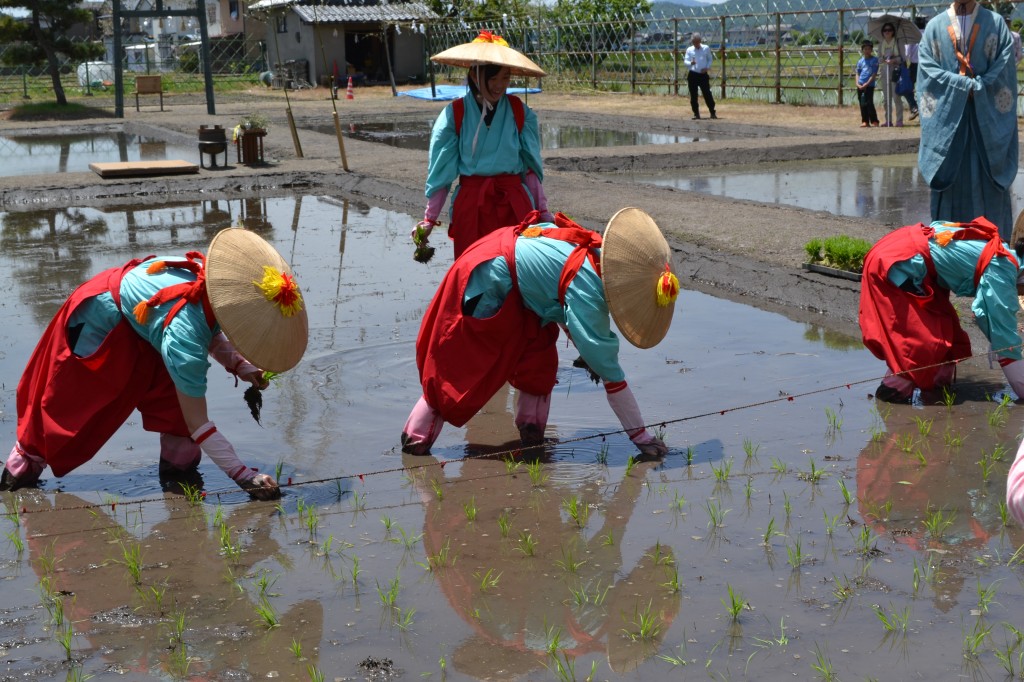 After washing off the bulk of the mud, the event was basically concluded, although there was still the last hurdle of putting our Japanese skills to the test of awkward cable news interviews. The locals are understandably interested to see how foreigners perceive the event, but we certainly struggled in condensing our rudimentary Japanese into usable sound bytes. We were then treated to a nice lunch and parting gifts by the shrine members in typically wonderful Japanese style. After a bit of down time to explore the mountain and shrine, we were off to Nagahama for the next phase of our rice adventure (for more on the Tarobogu rice planting ceremony, visit our friends at Where Next Japan who covered the event last year with some excellent photography). 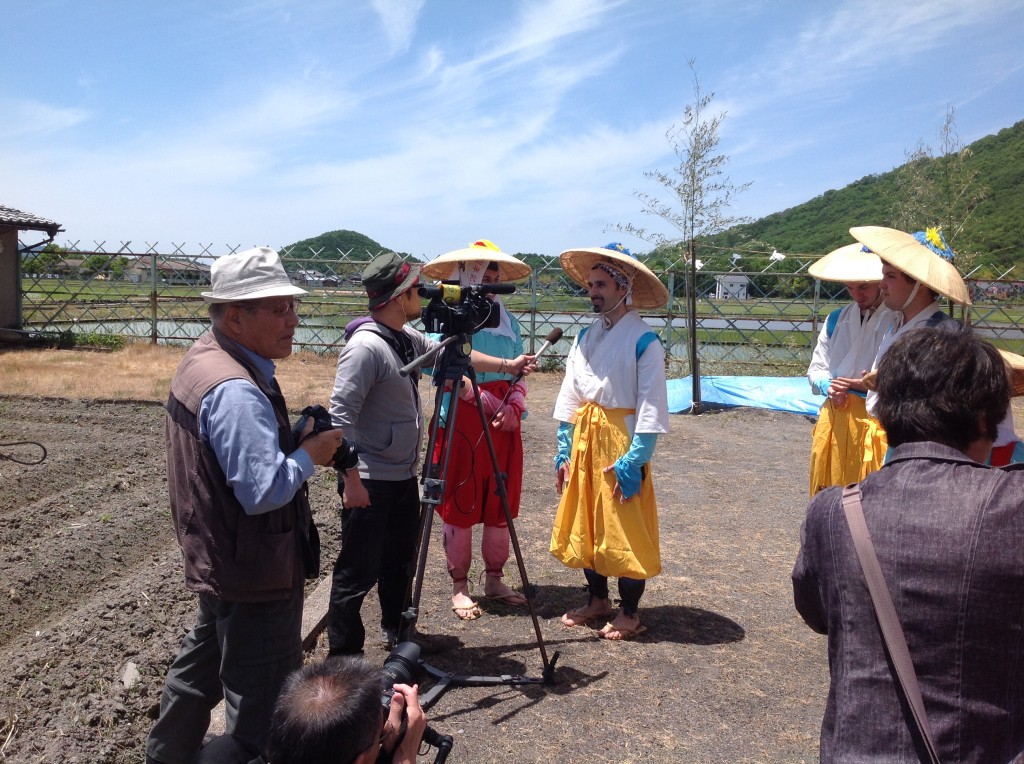 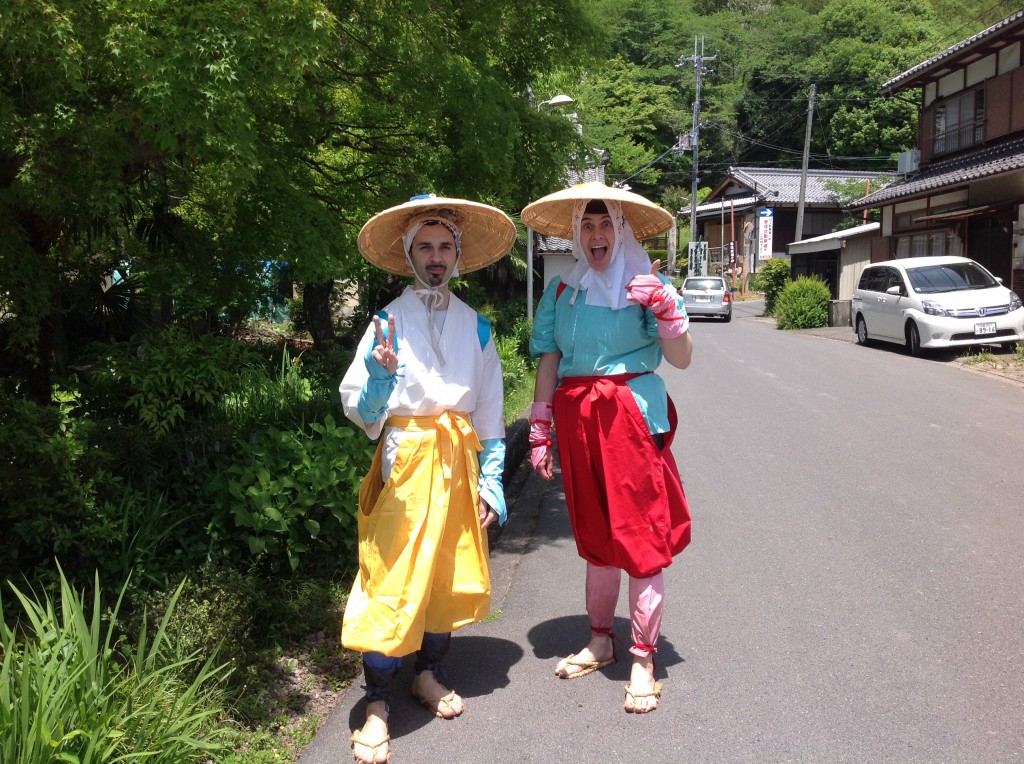 So here, I should probably re-mention Kokoku, a local community group in the Kohoku region (Nagahama and northern Shiga) focused on revitalization and community building, known as “machi zukuri” or “town building.” Similar to the local community organizations which have surfaced in the west as a counterbalance to globalization trends, there seems to be renewed interest in local business and culture here as well. These groups can be seen playing a vital role in rural and suburban areas that suffer from higher declining population rates than the national average as younger generations gravitate toward business prospects in the bigger cities. 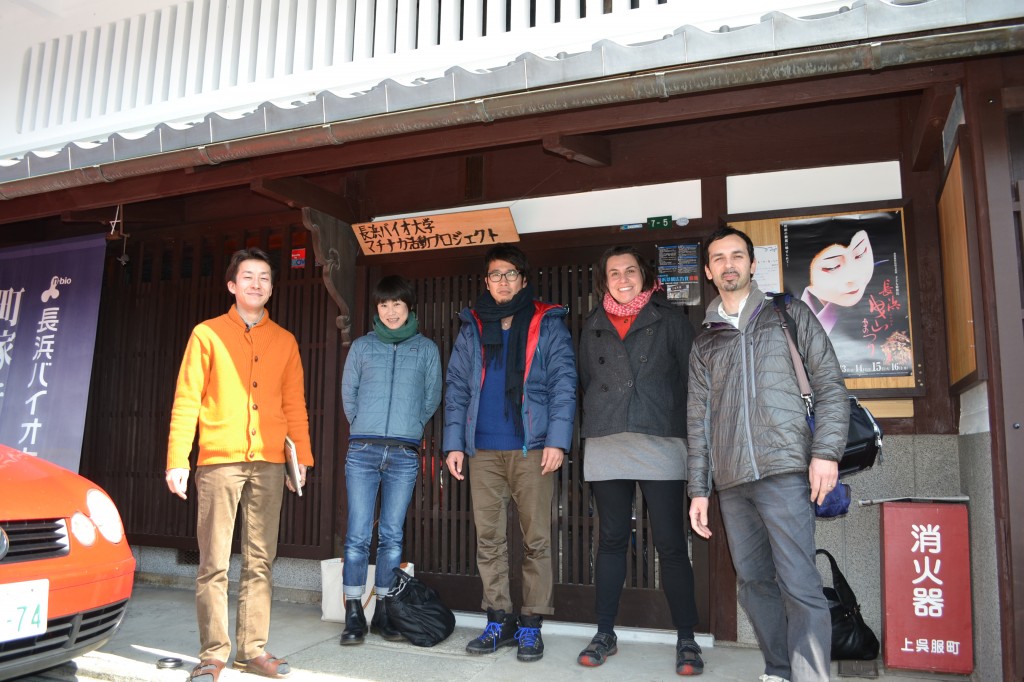 Be Wa has met with the Kokoku folks a few times recently to talk about working together, possibly with bilingual or translated events in the future, but they’re already quite active in organizing local Nagahama events in Japanese.

Sunday afternoon, Kokoku was hosting a workshop to promote local Shiga sake brewers, which we thought would be the perfect follow-up to a morning of traditional rice planting – an evening of rice drinking! The event consisted of two lecture style presentations, a challenging sake tasting quiz, and then relocation to a nearby restaurant where we enjoyed various local sakes with dinner.

For the workshop location, they chose the historic Kurokabe neighborhood house-turned-gallery, Afumisha, which is a beautiful old building with a cozy feel, although perhaps a bit too cozy in accommodating our group of about 25. But once we were settled on the tatami, we were in for an interesting learning experience. First, Maetani-san, a sake seller in Hikone, gave an overview of sake making in general, the various factors that determine sake properties, and a broad overview of the 40+ sake makers in Shiga. Next, Tomita-san, the current proprietor of a sake brewery that has been in his family for 14 generations, gave a presentation about the sake making process and his own brewery in Kinomoto. Next, we were challenged with a tasting quiz of 5 mystery sake types, taking notes on each, in hopes of matching with a final 6th sample, which was a repeat of one of the previous 5. About 1/3 of us successfully matched it and were given a nice little prize (I now have my own sake glass!). 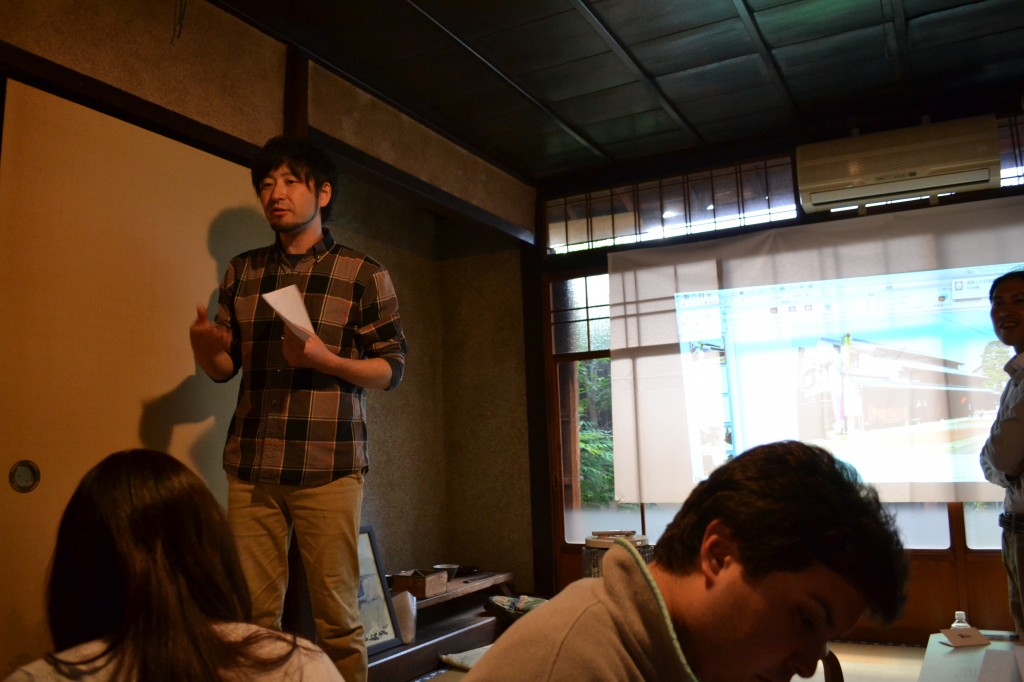 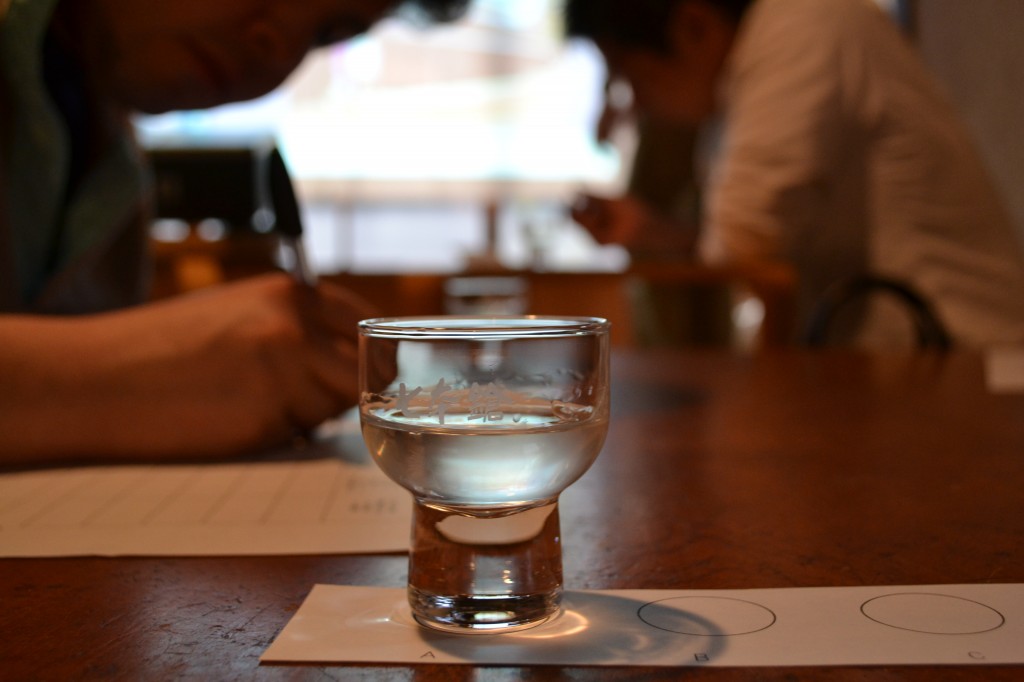 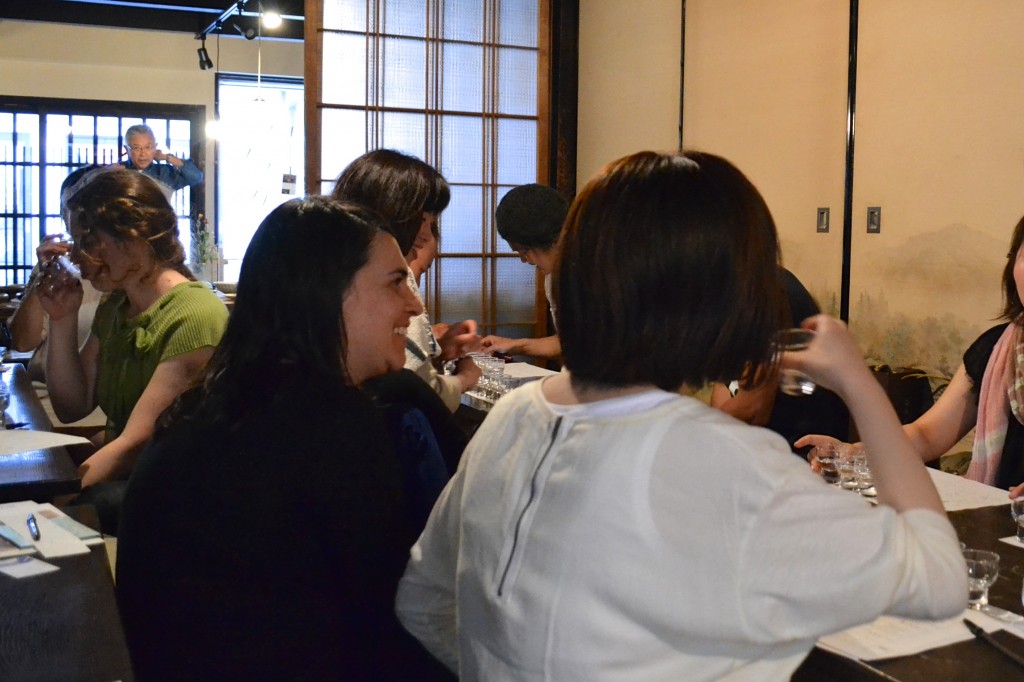 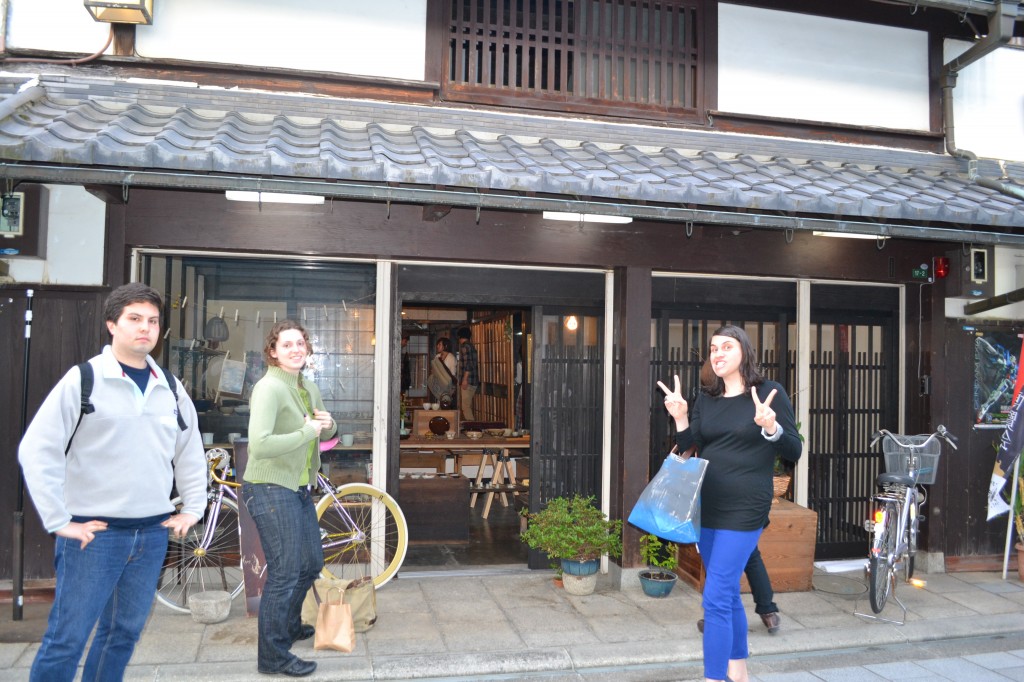 And on to the final leg of our journey, the workshop relocated to a local restaurant for more sake drinking over a dinner of sashimi, tempura, ramen, etc. It was a great chance to develop our sake palettes a bit with some of the region’s best products. The food was also good, but not the main point of course. To accommodate our group size though, we were seated in the restaurant’s 2nd floor, which was somewhat compartmentalized into booths, and may have hampered our mingling efforts a bit. Although, as our journey neared its end, and we filled up on food and sake, I’m not sure how much mingling we could coherently muster anyways. But Tomita-san and a few others showed off their English skills which made for some easier socializing as we talked about differences in the perception of sake in Japan vs. abroad. It certainly benefits more of a hip or luxury image overseas, whereas here it may suffer from a stereotype as a boring old guys’ drink. But that image may be changing thanks to the efforts of Tomita-san and other sake makers. As young people discover the value of traditional sake making or otaue-sai either through these types of community events or through the eyes of the international community, they may find that old traditions can still be interesting and relevant, especially in contrast to the homogenization of internet culture and globalization. 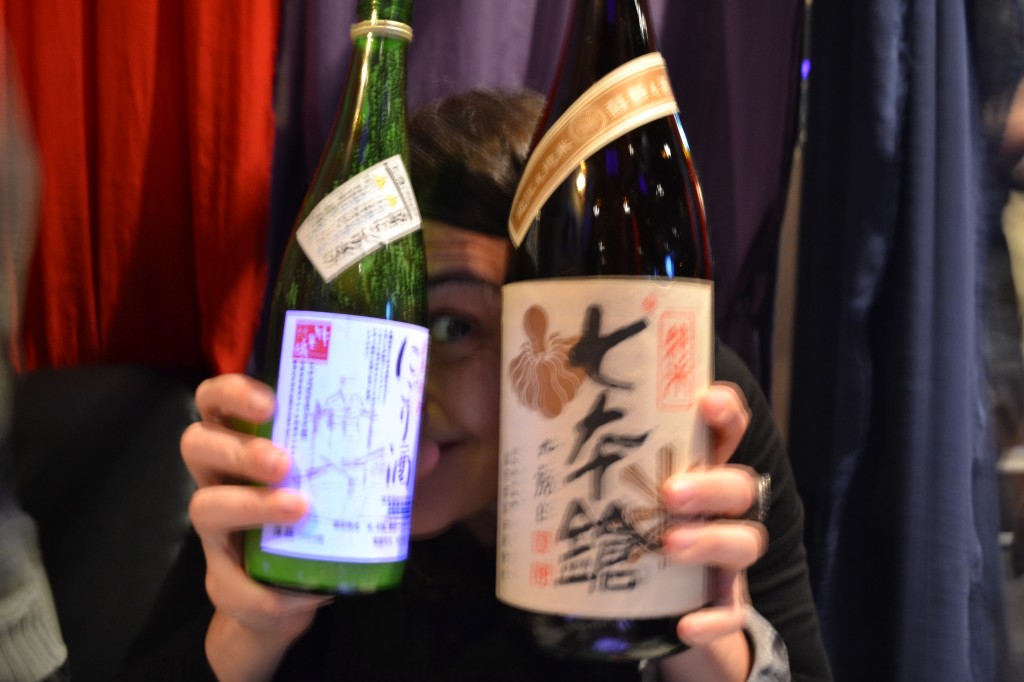 So enough rice talk for one week. To be continued at the next mochitsuki perhaps?… Oh, and if you have a chance to visit this or another rice planting festival, definitely take it!